Deer Ridge is a young community, not only in terms of when it was founded but also in terms of the people who live there—its residents have the lowest average age in all of St. Albert. Coincidence? Not at all. Many of the community’s first residents were young couples interested in starting families, and the demographics reflect this. However, Deer Ridge is no longer just known for being full of children. In fact, it’s now gaining buzz for having the most rapidly declining population, as the children of Deer Ridge grow up and leave to start lives and families of their own. 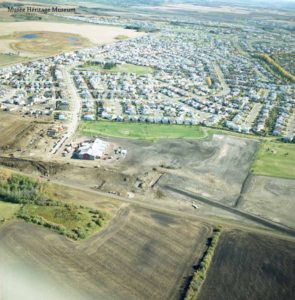 The construction of Deer Ridge first began in 1982, but the original vision for the neighbourhood was much smaller than the Deer Ridge we know today. The subdivision was originally planned to cover only the area east of Bellerose High School and south of Deer Ridge Drive. The northern, far eastern and western areas of Deer Ridge wouldn’t be conceived of until much later.

While Bellerose High accounted for one of the boundaries in the initial plan of the area, it wasn’t completed until 1988, when it opened as St. Albert’s second public high school. Previously, all non-Catholic high-school students in the city had attended Paul Kane, and the idea of a closer, newer high school was an appealing draw to many young parents, even though many of their children wouldn’t be attending high school for a few more years.

Deer Ridge continued to grow into the 90s, with more houses being added around the perimeter of the original street plan. Muriel Martin Elementary School was completed in 1991, giving the younger children of the community a school close to home. Not long after, in 1998, J.J. Nearing Elementary School opened its doors, giving Catholic families a nearby school as well.

Construction in Deer Ridge had more or less ceased by the year 2000, and the community settled into its role as a place for young families to raise their kids. It had great parks, great schools and a multitude of family-sized homes. Almost anywhere you looked, you could find well-worn street-hockey nets, play structures tucked between houses and sidewalks covered in chalk drawings. As children turned into teenagers, things changed a little bit. Noise complaints and reports of minor vandalism began to rise, and youth-focused community programs began to rise alongside them to provide positive outlets for bored teens.

Deer Ridge’s status as a community of young families will not be accurate for much longer. As the children of the community grow up and leave to make lives for themselves, the empty nesters who remain will shape and reinvent the neighbourhood’s identity, just as the residents of so many other communities have done before. In fact, they’re already off to a good start. In 2017, Deer Ridge hosted more than 15 block parties as a way for neighbours to get to know one another and build stronger bonds throughout the community.

New parents will, of course, continue to move into the area to raise their children, but the age demographics of Deer Ridge will be far more mixed than ever before. The next few years will also no doubt bring other new changes—though less in the buildings themselves, and more in the relationships and organizations formed between neighbours. t8n

It’s normal for residential developments to be built in a few phases over a few years, but Deer Ridge’s construction was so spaced out that it’s experienced a whopping 25 phases of development.

Despite the rapidly changing demographics in Deer Ridge, it is still home to the largest high school and young-adult population in St. Albert.