Ask most people what the main commercial hub of our city is, and they’ll say St. Albert Trail. But that reality is more of a recent development than most people realize. The majority of St. Albert’s subdivisions were, in fact, planned to include residential housing as well as small commercial hubs, strategically sprinkled throughout. The idea was that residents of St. Albert would be able to visit their corner stores for basic products and services, but for bigger services, they’d need to head downtown to the city’s business hub. Plans, however, have a way of changing, which is exactly what happened to the city’s commercial zoning plan when the community of Inglewood developed and helped turn St. Albert Trail into the shopping hot spot of the city.

Before 1980, there wasn’t much to be seen on the northern banks of the Sturgeon River. There was the mission, of course, and the newly built neighbourhood of Lacombe Park. But nothing besides farm fields covered the land to the east of St. Albert Trail. City Council’s plan for the area that they named “Inglewood Park” was to give priority to commercial developments, instead of going with the usual residential plan.

The first project to reach completion was
St. Albert Centre (the mall) in 1980, though it was almost never completed. The developer of the mall, a company known as Abacus Cities, went out of business halfway through the mall’s construction, leaving it little more than a frame in a construction yard. Not wanting to lose their investment in the space, The Hudson’s Bay Company worked with the city to bring the project to completion, funding the construction of not only the mall but also the traffic lights, roadwork and the Sturgeon Point Villas apartment complex—all of which were part of Abacus Cities’ original contract. It isn’t often that a department store has a hand in road and apartment construction, but in St. Albert’s case, the exception was made.

Red Willow Park was founded at the same time as the mall, through a partnership between the city and the Devonian Foundation (the same organization behind the Devonian Botanic Gardens, and many other city parks across Alberta). Their goal was to leave the centre of the city as a natural park for all citizens to enjoy.

That first decade of development also saw the construction of St. Albert’s second fire hall along Boudreau Road, a sign of the city’s rapid growth.

The 90s saw continued commercial expansion to the north of Bellerose Drive, with restaurants, businesses and warehouses popping up to fill the available space. Some of those restaurants and businesses have come and gone, but many of the staples, such as St. Albert
Bowling, continue to serve the community year after year.

Inglewood’s few residential neighbourhoods also reached completion during the 90s, ensuring that the community would not be exclusively comprised of businesses. 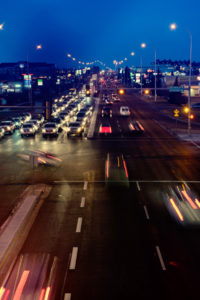 By 2001, the RCMP in St. Albert had outgrown their former headquarters in Grandin and moved to their current location beside the Fire Department on Boudreau Road. The St. Albert Food Bank and Community Village also found a home in Inglewood in 2009, further establishing Inglewood as an essential pillar of the community.

When Inglewood was first built, residents worried that it would attract shoppers from all over town, leaving other commercial areas without a customer base. And it did… for a while. But today, St. Albert is large enough to support many different shopping areas—some up and down the trail, some in the historic downtown district and others in smaller pockets all over the community. Today’s Inglewood may not be the commercial monolith it was expected to be in the 1980s, but its success as a shopping destination is one of the reasons that St. Albert Trail has become the commercial corridor we know today.  t8n

It’s hard to believe now, but when St. Albert Centre was first constructed, it stood alone on the very edge of town, similar to Costco’s positioning today.

The name “Inglewood” means “Wood of the Englishmen” and can be traced back to a specific forest in Northern England. Today, there are dozens of communities named Inglewood spread across the world in British Commonwealth countries.