Earlier this year, The St. Albert Singers’ Guild celebrated its 30th anniversary. The guild started with one simple goal: to come together as a community and celebrate music. While there have been many changes within the guild over the years, that goal has remained constant and has allowed the membership to form a lasting bond—singing together in perfect harmony. 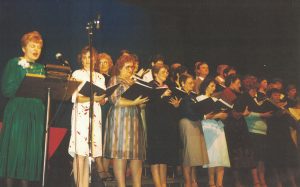 The St. Albert Singers’ Guild wasn’t officially formed until 1985, but its origins can be traced back almost a decade earlier. In the mid 70s, a local musician named Lillian Upright took over as the musical director for the choir of the St. Albert United Church. In addition to its regular choral hymns, the group soon began meeting to practice non-religious compositions as well. Word of this choir group spread, and before long, Lillian’s group was attracting members from outside the congregation.

The group was such a big hit with the community that, in 1985, the choir approached the St. Albert Community Services Cultural Department and officially got itself chartered as a guild. Not much changed in the day-to-day operations of the choir, but being able to classify itself as a guild showed the city that the choir was more than just a loose collection of friends. The singers had become an organized group of artists.

In 1989, Upright resigned as the musical director of the guild in order to pursue her own passions as a solo pianist, but her work in laying the foundations of the guild were never forgotten. There are talented singers all over St. Albert, but it takes a special personality to unite them all into an organization that can sustain itself for over 30 years.

The early 90s were a time of change for the choir. After Upright’s departure, a few individuals stepped up to lead the guild, including Tim Hankewich from 1989 to 1990, Jan Dammann from 1990 to 1991, and Eric Mireau from 1991 to 1992. Each director brought a bit of his or her own personality to the role, but each ultimately had to resign in order to pursue other career opportunities. In the absence of an official director, Eric’s daughter, Criselda Mireau, agreed to act as the interim conductor of the group until a suitable replacement could be found. In the end, it turned out that there was no candidate more suitable than Mireau herself, and she’s been directing the guild ever since.

Under Mireau’s guidance, the guild’s membership soared from 24 members to over 50, and the scope of its productions grew and expanded as well. Soon enough, a waiting list even had to be instituted just to manage all of the newcomers. 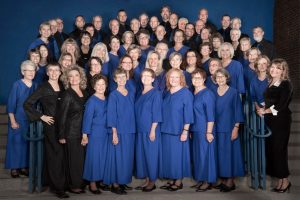 For whatever reason, choral singing always tends to attract more women than men, and because of this, the Singers’ Guild waiting list had a bit of a gender imbalance. Rather than keeping the women of St. Albert waiting for a position that might take years to open, the guild expanded to form an all-female choir, now known as the St. Albert Women’s Vocal Ensemble.

With the success of the women’s choir and the mixed choir, the guild found itself expanding yet again. At the request of its members, a children’s choir was also formed. While initially made up of the children of the existing membership, this third choir soon began to attract young singers from all over the city.

Recent years have seen the Singers’ Guild scale back somewhat. In fact, it capped its mixed choir membership at 70 singers, a number the guild hopes will be more manageable than what it’s been in the past. The children’s choir has been put on hiatus this year as well. Also part of the guild’s new mandate is the desire to adopt a bit of a slower pace. But what the guild calls “slower” is still a remarkable amount of work. This year alone, the guild visited Germany as part of its first international tour, and held a grand concert and banquet in celebration of the singers’ 30th anniversary. Things might be a little bit slower than they have been in years past, but the guild certainly shows no sign of stopping.  t8n