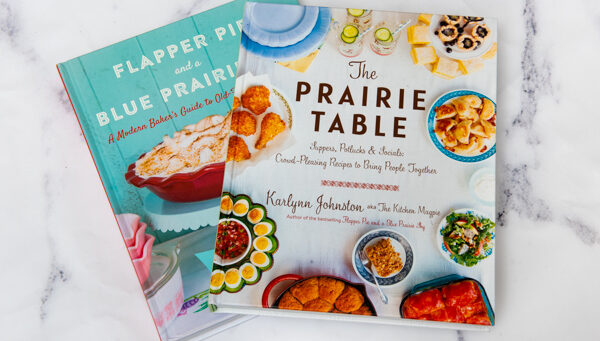 One odd confession that foodie blogger Karlynn Johnston revealed on her website and hopes her readers don’t take seriously is that she’d rather burn down her house than clean it up.

“I think that just comes from working at home,” she says while laughing about the premise for such a remark. “I have to clean my house as an all-in-one deal. Not many people have to work and clean at the same time.”

It’s amazing that Johnston would even have time for it. On any workday in her Edmonton home, Johnston would be writing about kitchen tips, travel experiences and even some of her favourite Disney shows. That’s all on top of some 2,000 recipes she’s added onto her Kitchen Magpie site (thekitchenmagpie.com) the past 11 years.

Oh, and then there’s working on a third cookbook for Random House. She’s already hit bestseller status with the dessert-oriented Flapper Pie & A Blue Prairie Sky and a collection of ethnic and western-Canadian recipes that replete her second published outing The Prairie Table.

Ever since a literary agent convinced Johnston to publish her recipes in print form, Johnston has become a culinary star thanks in part to appearances on U.S.-based shopping channel QVC and accolades from People Magazine, NBC’s Today Show and pop-culture website Buzzfeed. Before her publishing career took off, Kitchen Magpie was receiving up to 6,000 hits a month. They’ve since exploded to three million monthly visits, which double during the holiday season.

For all that, the operation still remains as a family enterprise with Johnston doing much of the heavy lifting, although her husband Mike handles the technology end of things from site-building to troubleshooting. He also blogs on the cocktails section of Kitchen Magpie. Her kids, mother and sister are also on hand to help create and test all the recipes before they’re approved and posting. The testing part is obviously a side benefit no family member can refuse.

It’s also what Johnston believes distances her from other cookbook offerings. “I have personally made every meal made on my website,” she says. “A lot of websites hire developers to cook recipes. It’s important that people know that we test out all our recipes ourselves.”

That philosophy seems to be an endearing draw for her audiences, which seems to have grown ever since the COVID-19 pandemic hit the region earlier this year. “Ever since the virus of 2020, my website has just exploded and everyone’s cooking more,” said Johnston. “I think everyone was making sourdough when we were quarantining. Everyone makes perogies more often; they’re home all day and they have time for that now.”

Johnston has also noticed that more households are rediscovering old family recipes. And that’s an element that not only adds a down-home feel to her work, it also reinforces her belief that western Canada has a legitimate culinary culture.

“My background is a large part of the culture,” Johnston says. “I’m Ukrainian and Polish and that’s a huge part of it. There also the indigenous cuisine that’s making a comeback. So I think there are many parts of cuisine, such as the green onion cake craze, that originated from Edmonton. It’s an interesting melting pot of cuisine that we have here.”

One element of cooking that’s part of any culture, however, is the cleaning that Johnston dreads. But despite her comment on the chore, don’t count on setting her fortunes ablaze anytime soon