“Production right now is relatively minor, but in two or three years we’re going to start seeing our first flush of fruit,” remarks Kenton Zerbin, permaculture teacher and consultant. Zerbin is referring to the St. Albert Community Food Forest across from the grain elevators, the first of its kind in town.

Together with local urban agriculture enthusiasts, Zerbin designed this site using permaculture techniques, an approach to growing food that mimics the design of natural ecosystems for self-sufficiency. He estimates that in five-to-seven
years the forest will reach its capacity, offering a safe nutritious source of edibles such as plums, red currants, gooseberries, haskap berries, saskatoons, comfrey, and more. And lots of it, by the sound of things—free for whoever wants it. 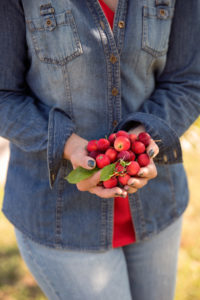 Ripe for the Picking

Food forestry and permaculture might be unfamiliar concepts to many, but they’re part of a growing realization that cities, like St. Albert, are chock full of potential when it comes to food. The free variety, that is. It’s literally all around us—in city parks, in the woods, alongside rivers and roadways. Numerous books detail the variety of edible fruit, plant, and mushroom species available in Central Alberta—much of it on public land, available to anyone with a bucket and a little know-how. [Editor’s note: It’s easy to mistake edible for poisonous mushrooms because they can look very similar. Best to leave this to the experts.]

The appeal of urban foraging is understandable, as any trip to the grocery store will uncover. Healthy food ain’t cheap. In 2013, the Edmonton Community Foundation reported that food costs had risen by more than double the overall inflation rate over the past 10 years. Food prices are notoriously volatile, and it’s worth noting that in 2012 the Edmonton Food Bank distributed more than $17,000,000 worth of food. In light of this, it’s easy to see why interest in food security and less expensive food options continue to run high. Add to this, the burgeoning interest in organic and locally grown produce, and free food forests make good sense.

A World of Foraging Possibilities

On paper, it seems there’s little stopping us from getting out there and taking advantage of the cornucopia of produce that’s growing wild all around us. But in practice, obstacles do exist. The first is knowing where to look. Cue the Internet, where maps have been popping up pinpointing the precise locations of fruit trees and other edible plants around the world. The St. Albert map came online last year, created by a local resident using Google Maps. It shows where people can get their fill of saskatoons, apples, crabapples, pears, Nanking cherries, hazelnuts, rhubarb, and more—all accessible to the public and free for the picking.

The biggest roadblock, however, is probably time and energy. Supermarket produce might be pricer, but it’s easy, and this is the likely cause of why so much backyard fruit goes to waste. Considering that an average apple tree can produce more than 100 kg of apples in a year, for some households even a single tree can be too much. And when you consider how many trees a city may have, both public and private, this adds up to a staggering amount of food that’s, unfortunately, for the birds.

Seeing an obvious need, fruit rescue organizations have emerged across the globe. Not Far From the Tree, a Toronto-based outfit, estimates their urban canopy produces 1.5 million pounds of fruit a year, and most of it goes unpicked. Likewise, Sweden’s Urban Fruit Initiative claims that although Swedish gardens boast more apples than commercial producers and imports combined, only 10 percent of garden apples are consumed.

Locally, Operation Fruit Rescue Edmonton (OFRE) musters volunteers to harvest backyard trees of homeowners who are unable to use their fruit. Like other fruit rescues, the haul from each pick is divvied up, with roughly a quarter each going to the homeowner, the volunteers, OFRE, and a charity such as the Food Bank or Hope Mission. 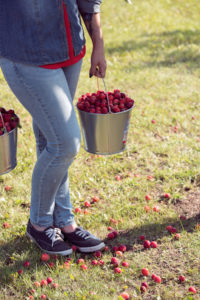 “I truly applaud these organizations,” says Zerbin, commenting on OFRE and similar groups. “But it doesn’t reduce in the slightest the call to action to put systems in place where people will use them, own them, and be proud of them.”

Zerbin is talking about the original St. Albert Community Food Forest and others like it in the St. Albert and Edmonton regions. In addition to the first St. Albert food forest, Zerbin has done consulting and installations with homeowners and at schools, including one this past spring at Brander Gardens School in South Edmonton.

In downtown Edmonton, a food forest has sprung up on public land along the River Valley—in the MacKinnon Ravine, just west of downtown. The MacKinnon Food Forest began in 2014 as part of Root for Trees, an initiative by the City to plant trees, with a minimum target of 16,000 a year in order to increase Edmonton’s canopy cover from 10 to 20 percent. (St. Albert’s canopy cover is 13 percent, according to the 2017 Urban Forest Management Plan, and there’s hope to also increase this to 20 percent.)

“That was one of the ways we were able to do something like this,” Bajer says. “I don’t think the City would’ve been onboard had it been non-native species.”

That these forests are being funded at all means the benefits of wild-harvested food is clear and something to be encouraged. And St. Albert’s forest plan recognizes this, too. But while the plan doesn’t offer any concrete ideas for building more, it does list the food forest as one of several examples in the city of “treed environments optimized for functionality.” The plan also notes that the demand for food-growing space from residents who lack gardens and yards still outstrips the supply. In other words, we could be seeing more food forests sooner than later as the city goes greener (and woodier). 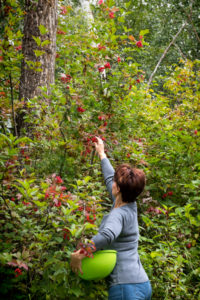 Yet, it was conversations among local urban agriculture enthusiasts, rather than any municipal initiative, that brought about the first food forest in St. Albert. Regular meetings brought like-minded people together who arranged for information sessions, City funding, supplies, plant donations from local retailers, and volunteers. And Zerbin designed the forest following the tenets of permaculture.

To recap, permaculture aims to re-create ecosystems that not only produce food, but are also self-sustaining. Fortunately,
Mother Nature gives us a pretty good model to riff on. Forests are made up of layers, from the canopy and understory to the ground cover and roots—and each has a function.Canopies provide shade and protection so lower plants can thrive; meanwhile, perennials in the herbaceous layer die each year, feeding essential nutrients back into the soil. It’s this interplay between layers that makes a forest more than the sum of its parts, and it’s an incredibly efficient and resilient system that sustains many species of plants and animals in a small area.

As such, a good food forest design optimizes available sunlight, water, and soil through the careful arrangement of elements. For instance, plants can be ‘stacked’ so each one gets the appropriate amount of sunlight, while swales (low moist tracks of land) can retain or redirect water to where it’s needed. Installation of the St. Albert Community Food Forest began in 2016
through what Zerbin calls “perma-blitzes,” with volunteers planting and building earthworks, such as swales. Now with the building and planting done, much of the work is maintenance. “We try to plan at least one blitz a year for upkeep,” Zerbin says. Beyond that, the forest is more or less left to its own devices.

But will people use it? It’s not a question Zerbin seems to be sweating. He’s only onsite now and then, but he often runs into locals checking it out because they heard about it through word of mouth.

“I actually think there’s going to be more of these popping up,” Zerbin says. “It’s a growing movement. People can see that these spaces are possible, that they can be beautiful, and that they can produce a lot of food without a lot of work.”

Bajer is equally positive. “The cultural narrative we tell ourselves, consciously or not, is that humans make nature worse.” He explains that this pessimistic sentiment doesn’t give us a roadmap for the future. However, he believes that food forests are turning this around through the optimism associated with them, and with the message that with a little creativity, cities can coexist with nature and harvest abundant rewards. t8n

Keep these tips in mind so you don’t inadvertently vex other foragers, or the law. Or karma.