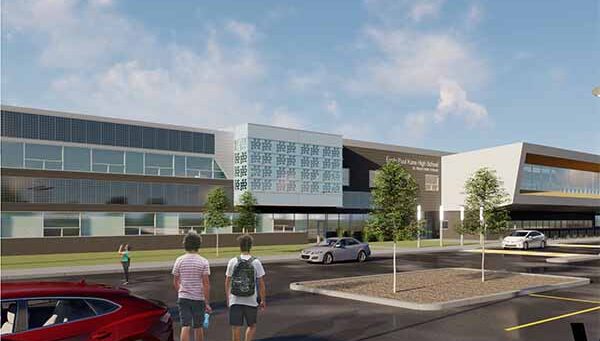 In the 1950s, St. Albert experienced an influx of residents who sought a Protestant education for their children. At the time, schools like Sir Alexander Mackenzie and Sir George Simpson were about to offer Grades K-9. But the only option for Grades 10-12 was St. Albert Catholic High School. In 1963, the completion of Paul Kane High School secured St. Albert’s ability to offer students a full K-12 Protestant education. Today, Paul Kane continues to cater to the needs of the public by offering both an extensive advanced placement program and the province’s largest selection of French language courses north of Calgary.

The original Paul Kane High School opened on Sept. 1, 1963 in the building now occupied by Lorne Akins Junior High School. Construction began in 1961, totaling a cost of $515,832 for the structure and approximately $60,000 for its contents. In attendance at the school’s grand opening was R. W. Abbot, a representative of the Hudson’s Bay Company. He informed the audience of the school’s namesake, Paul Kane, who was commissioned by the HBC in 1845 to paint pictures of Western indigenous life.

That first year, enrollment was calculated at 343 pupils and offered to students ranging Grades 7-12. However, over the next three years, junior high classes were gradually phased out. By 1967, Paul Kane housed only high school students.

By the 1970s, the high school was no longer able to accommodate the growing number of students seeking enrollment. In 1971, it was decided that a new school would be constructed across the field.

Located at 12 Cunningham Road, this new building adopted the name Paul Kane, while the original was renamed Lorne Akins. Student occupancy took place on Friday, March 2, 1973. As the story goes, students literally marched their desks and belongings across the snow-covered field before resuming class in the new high school that same afternoon.

In January 1985, teachers from St. Albert Protestant Schools declared a strike in retaliation to salary negotiations. It was reported by the St. Albert Gazette that the school board offered no increase for 1984, and a three-percent increase for 1985. Meanwhile, the teachers wanted a four-percent increase over two years. The strike, which took place the week of Monday, January 14, involved nearly 300 teachers, affecting 5,000 students in 11 schools, including those at Paul Kane.

In March 1996, Paul Kane became the first Alberta high school to offer a class with the sole purpose of helping students quit smoking. The class, which ran on Tuesdays and Thursdays, had an enrollment of 20. It covered subjects such as nicotine and what it does to the body, how to cope with withdrawal, and strategies to quit smoking–such as exercise. Surprisingly, the class was a hit among students. This was in part due to its relatable instructor. Hired by the

St. Albert Health Centre, Bob Fystro was a 24-year-old ex-tobacco user whom the high school believed would be a more approachable role model.

In 2004, Paul Kane became a hub for the province’s basketball community. At the time, the Alberta Basketball Association was working on developing programs in addition to those already in place in the education system. These programs were designed to attract the province’s top players for competition at a national level. In fact, a series of tests were created by NBA Canada in order to identify who these athletes were. In March 2004, Paul Kane became the first school in Alberta to host one of these competitions. Among the exercises included were ball-handling, jump shots and free throws, vertical jump, and various agility challenges.

In March 2018, the province announced its plans to replace Paul Kane with a two-storey, 14,000 square-metre building in order to accommodate St. Albert’s growing student population. Constructed adjacent to the present building, the new school will be able to comfortably house 1,500 students–500 more than the current count.

In keeping with modern architectural practices, current plans portray a completely barrier-free, accessible design throughout the building and grounds. The new school will also utilize “green” features such as electric vehicle charging stations, sustainable building materials, and solar power that will provide much of the energy for the building as well as generate power back into the local grid.

Paul Kane High School was named in honour of Irish-born Canadian painter and explorer, Paul Kane (1810 – 1871). He was 10 years old when his family moved from Ireland to Upper Canada in 1819. A painter of furniture, coaches, and signs by trade, he painted portraits in his spare time. In 1845, after studying in Europe for three years–where he was inspired by American artist George Catlin’s paintings of indigenous life–Kane returned to Canada and headed west. He recorded his experiences on canvas and in his book, Wanderings of an Artist, which includes a painting of his participation in one of the last great buffalo hunts.