Some of our most vivid memories growing up revolve around movie theatres—fresh popcorn, sticky floors and, best of all, time spent with loved ones. There was, and still is, nothing quite like watching a story unfold on the big screen. A trip to the theatre transports us to another dimension where the line between reality and make-believe is blurred. It’s a place where, even for a few hours, all of our troubles seem to fade away. It’s entertainment, pure and simple. And with advancements such as 3-D glasses and, ah, reclinable seating, St. Albert moviegoers have even more to get excited about—except maybe for the fact they have to travel outside city limits to watch mainstream Hollywood blockbusters. It wasn’t always this way though. Here’s a look back. 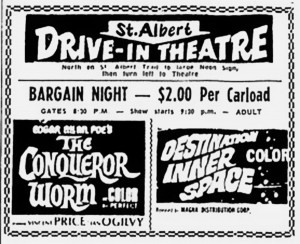 The early 1900s were a time of great advancement for film and motion picture technology. While the silent film era lasted until the late 1920s, filmmakers pushed into new creative territory with exploration into editing and backdrops. One of the earliest and most famous movies created during this time was The Great Train Robbery in 1903.

Soon, motion pictures became escapist entertainment for only a nickel. Parlours, lecture halls and storefronts were often converted into nickelodeons, the world’s first real movie theatres, where films were usually accompanied by other entertainment, such as piano playing, sing-along songs or vaudeville-type acts.

City records show that even though St. Albert’s population hovered modestly around 600 people in 1912, a movie theatre called Empress Hall/Théatre Empress opened that year along Mission Avenue. Operated by David Joyal, the theatre not only served as a movie hall but also hosted other meetings and events.

In 1953, Stan Hauptman and his family opened the St. Albert Drive-In Theatre Company, the first real form of entertainment for youth in the city and only the third drive-in business in the Edmonton region. Following the end of the Second World War, the drive-in concept became more popular as people placed an acute emphasis on family. Parents particularly loved it because kids could play in the playground built in front of the screen until darkness fell and the film began.

Considered ultra-modern for the time, the drive-in boasted over $100,000 in the latest projection and sound equipment, the largest screen in the Edmonton region, spots for over 550 cars, as well as seating for people without vehicles.

Located near a slough off Grandin Road, the drive-in remained a popular local attraction until it closed in 1990.

While the 70s marked a creative high point for the US film industry with mind-blowing action movies, such as Jaws and Star Wars, the 80s were less experimental and designed more for mass audience appeal. Blockbusters like E.T., Back to the Future and Ghostbusters made their way into theatres around the world—including here at home.

With a population lingering around 30,000 people, St. Albert Cinemas, our city’s first movie theatre, burst onto the scene in the 80s. The seven-screen cinema, officially named Cineplex Odeon Village Tree Cinemas, was located along Gervais Road in Village Tree Mall.

In the late 90s, residents welcomed a second movie complex when Grandin Theatres opened its doors in a struggling mall called Grandin Park Plaza. Now, in case you weren’t in St. Albert 35 years ago and wondered why the theatre looked suspiciously like an abandoned Safeway—well, it was. The independently owned theatre kept ticket prices low by sticking with 35-mm movie projector technology instead of going digital.

The new millennium was a turning point in the history of film with the creation of everything from jaw-dropping special effects and IMAX theatres to cellphones that could play movies with the click of a button.

In 2003, Cineplex, one of Canada’s leading entertainment companies, opened its massive 14-screen cinema just outside city limits on 137 Avenue and St. Albert Trail. The theatres at Village Tree subsequently closed down, with Grandin Theatres following suit in 2014.

Alas, today with a population of over 60,000 people, St. Albert finds itself without a movie theatre complex. But for how long? Only time will tell. In the meantime, residents can get their big-screen “fix” locally with Reel Monday movie screenings (thanks to The Friends of the St. Albert Public Library) the Arden Theatre’s new Cinema Series and drive-in movie nights presented a few times each summer by St. Albert Centre. t8n

In 2015, the City of St. Albert Economic Development Division conducted a study to identify needs and opportunities for entertainment. One of the recommendations called for the development of a seven-to-nine-screen movie theatre complex in the city’s downtown.

Canada was the first country in the world to have a two-screen theatre. In 1957, the Elgin Theatre in Ottawa became the first venue to offer two different films simultaneously.

The origin of movies and motion pictures began in the late 1800s with the invention of various contraptions designed to trick the eye into seeing an illusion of motion from a display of still frames in quick succession.