To some, infill is—literally and figuratively—a dirty word. Conjuring images of older neighbourhoods with modern homes dropped onto lots here and there, the concept has fans and detractors and many who just plain don’t understand the role infill can play in the health of a community. And while Edmonton leads many other Alberta cities with a detailed roadmap for residential infill, St. Albert isn’t so quick to come on board—trying to balance the need to attract a more diverse population that wants smaller, more affordable housing options with the desires of an established population that likes things as they are.

Simply, infill means developing in areas that are already developed. Sometimes that means taking one house down and putting another on the same footprint (lot width, height and depth), but it can also mean dividing one lot in half or taking two or more lots in a row and building semi-detached row homes, townhouses or multi-family duplexes, apartments or condominiums on that space.

Proponents of infill say the idea is a no-brainer: it allows for a diversity of housing types in mature neighbourhoods that makes sense environmentally and economically, with more residents sharing the tax base and using already established utilities, public transportation, schools and parks. Others believe infill brings down property values, caters to the rental market, students and singles or those who might destroy the character of a neighbourhood with modern houses that just don’t fit.

St. Albert resident and home developer, Paul Schaefer, has been part of Edmonton’s burgeoning residential infill plan for several years, creating the first so-called “skinny houses” in the city’s Westmount area. By subdividing a typical 40-foot-wide lot and putting in two 17-foot-wide modern style homes each of 1,600 square-feet, Schaefer says he has been able to prove the point that people don’t need big yards and huge square footage to have a functional, efficient home. 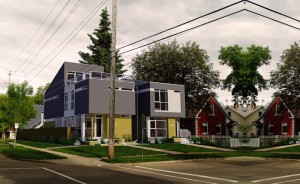 “This area of Alberta has some of the best agricultural land, but we’re chewing it up by spreading out. We have to stop putting up pavilions in fields. The concept of the four-person nuclear family in a single-family home is over,” Schaefer says. “There has to be a shift in mindset where people don’t see living in a smaller or attached home or condo as somehow substandard. But that change requires both a political will and community will.”

Jeff Chase, senior planner with the City of Edmonton, says the task of processing zoning changes and shifting people’s attitudes is huge, especially in a city with over 200 mature neighbourhoods where infill is possible. There, the aim is to have 25 percent of all new housing units located in mature areas and along transit routes. “There are as many people nervous about change as there are those who say the city is moving much too slowly with infill,” Chase says. “But we have to respond to a changing population of young families, new immigrants, singles and downsizing boomers who want to be close to the city core.”

St. Albert is just starting to grapple with those same issues and with how to make the city more diverse and affordable for a wider variety of residents. As of late 2014, an examination of St. Albert’s competitive position in the regional housing market showed that while the city’s single-family housing market is priced above others in the region, it also has fewer multi-family housing options. Since capital region growth is expected to be driven from migration and families in the 25 to 44 age range, the recently approved implementation strategy of St. Albert’s housing diversity plan is set to focus on housing for singles, small households and workforce housing (so-called micro-units for the largely part-time retail workers that make up the bulk of employment in the city) and housing for seniors and people with disabilities.

Carol Bergum, Director of Planning and Development with the City of St. Albert, says 2015 will also see a review of the city’s land-use bylaw and residential land districts to determine how to facilitate more diverse housing types and forms. While the city’s hand is being forced, to some extent, by the Capital Region Growth Plan to meet a minimum residential density, Bergum says there is a growing interest among residents, developers and politicians to see it happen.

And there are signs of change around the city—the luxury condo developments at Botanica (on the old Hole’s Greenhouses site) and Tenor on the River (a condo/apartment project on the Sturgeon River in Braeside) will house more people in less space, as will the high-density plans for development on the old Grandin Mall site downtown.

But developers like Schaefer aren’t convinced about St. Albert’s desire to embrace the concept of infill, pointing to what he says are roadblocks written into the city’s zoning bylaw thanks to wording such as “fitting in with the character of the neighbourhood.”

“There are mature trees, sidewalks and unbelievable streetscapes that could come alive in Sturgeon, Mission and on Perron Street, but we need walkable streets, easy access to transportation and a mass of people living nearby in a high, medium and low-density mix,” Schaefer says. “We want to respect what’s already in a neighbourhood but strive to offer something different, too. It’s about not being afraid of the unknown—about allowing potential to happen.”

All agree that change won’t happen overnight. “It takes time for new regulations to be put in place,” says Bergum. “We won’t see the results of the decisions we make on infill for 10 years.” t8n

Did You Know?
When the province okayed basement suites for single-family homes in 2007, St. Albert found success with the basement suite grant program. Some 80 suites were funded, and another 80 were waiting in the wings before the program ended. Today there are about 150 legal basement suites in the city.