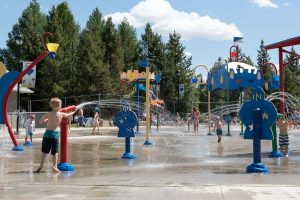 Run by: The City of St. Albert

Interesting fact: There are 29 different water features in the park, offering many unique and creative ways to cool down.

Summers in Canada are never quite long enough, but part of being Canadian is knowing how to make the most of this brief, beautiful season. Perhaps this explains the surging popularity of spray parks across the country. St. Albert’s Woodlands Water Play Park is open for only four months of the year, but in that time, it manages to attract a staggering number of guests. Families have been coming to the play park for 20 years now, looking for (and finding) ways to enjoy those hot summer days together. The city’s Recreation & Parks Department has been working behind the scenes that entire time to keep the park safe, free and fun for all visitors.

When Woodlands Water Play Park opened in 1995, it was the first of its kind in Western Canada. While its popularity has inspired the construction of many similar spray parks over the years, this has done nothing to slow the popularity of the original park. To this day, guests continue to flock to the banks of the Sturgeon River from all over the capital region.

The park’s first decade of operation was, if anything, a little too successful. The park’s mechanical systems began to break down over the strain of such heavy use, and during the summer of 2006, the park shut down for some much-needed renovations. The year of closure didn’t hurt the play park’s guest numbers at all; the first two months back in operation saw over 17,000 people pass through its gates.

Part of Woodlands Water Play Park’s enduring appeal is the amount of safety features that are built into its design. Parents are able to rest easy and enjoy the sun, knowing that their kids can’t get into too much trouble on the park grounds. First among these safety features is the fence that completely encloses the park. Young children can’t wander off into the surrounding parkland, and if they do get out of sight for a moment, parents will know that they can’t have gone far.

The play park is also divided into three age-appropriate sections so that older children can run and leap about to their heart’s content without the risk that they’ll bowl over any of the younger guests. But if any of the more boisterous children do manage to hurt themselves, there are city supervisors on site, ready to deliver first-aid treatment as soon as it’s needed.

In addition to these safety features, Woodlands boasts many useful amenities that continue to set it apart from similar parks in the region. There are washrooms and change rooms on site, as well as a fully stocked concession stand. And for those who’ve had enough splashing, but not enough of the sunny day, the grounds also include a dry park, as well as a large grassy area perfect for an afternoon picnic.

The next time that the summer gets a little bit too hot, consider heading to St. Albert’s spray park instead of retreating into the coolness of the basement. The basement will be around all year, but these sunny days need to be enjoyed while they last. t8n 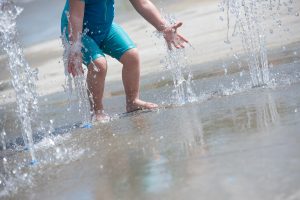 During construction, the aesthetic theme of Woodlands Water Play Park was put to a community vote. The iconic medieval theme won hands down, beating both the small-town and cowboy themes that were also considered.

Being the first of its kind in the province, Woodlands Water Play Park had no health or safety regulations to guide its construction. The park’s improvised health and safety features were so successful, however, that Woodlands became the official model for all future spray parks in Alberta.