Though ‘department stores’ had been around in North America for a hundred years, beginning in the 1950s indoor ‘shopping malls’—where separate businesses set up shop under one roof—began sweeping the nation. These were public places that were warm in the winter and cool in the summer; places where you could meet friends, shop for hours, or just hang out. In short, they were a modern urban oasis. But shopping habits have changed, and the concept of the mall doesn’t have as wide of an appeal as it once did. With the rise of online shopping and the popularity of big-box stores, shopping malls are in decline all over the country. While the golden age of the shopping mall is past, it’s certainly left its mark on St. Albert.

St. Albert’s first shopping centre was known as Grandin Shopper’s Park, though most of us will remember it as Grandin Mall. It first opened in 1962, as an open-air strip mall boasting over a dozen shops. For the first time, you could visit the bakery, the drug store, the bank, the grocery store, and more, all in one trip. The open-air part of the mall was soon enclosed and expanded, with Safeway on one end and St. Albert’s first Bowling Alley, Vallee Lanes, on the other.

While Grandin Shopper’s Park seemed to have a little bit of everything, the owners of the mall were constantly petitioning Town Council for permission to expand. They envisioned a hotel, jogging tracks, an amphitheatre, multiple department stores and even an interior rail line to help shoppers get from one end of the mall to the other.

Most of these extravagant ideas never saw the light of day, but the mall itself expanded a few times to include more stores to meet the demands of the ever-increasing crowds. 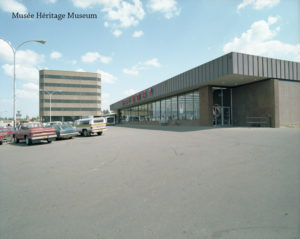 First came St. Albert Centre in 1980. While Grandin Shopper’s Park had been located centrally, close to downtown, St. Albert Centre was built on what was then the outskirts of town. The mall kicked off the commercialization of St. Albert Trail, drawing people from downtown to a place where parking was abundant, and it seemed like there was infinite room to expand.

Village Tree Mall opened its doors the following year in 1981. While indoor shopping malls were becoming old news by this point, Village Tree Mall made a splash when it opened St. Albert’s very first movie theatre, St. Albert Cinemas. The 8-foot by 12-foot screens were tiny by today’s standards, and the 112-person seating capacity could be described as cramped. For the first time though, residents of St. Albert could see a movie without having to drive into Edmonton.

In the 1990s, the 28-year-old Grandin Mall started to downsize. The bowling alley shut its doors, and the Safeway closed too, leaving only a handful of shops in the mall. The centrally located Grandin Mall, once the pride of St. Albert, was having a hard time competing with the variety of stores along St. Albert Trail. But the mall was saved, for a time, by the renovation of the old Safeway into Grandin Theatres.

Grandin Theatres didn’t have the most current films, and the screening equipment was known to break down on occasion, but the movie theatre won a place in the hearts of residents, and became a major draw for the mall. 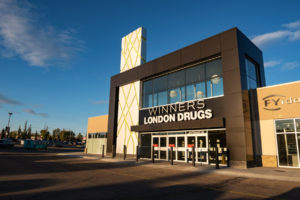 By the time the new millennium came around, the cultural obsession with the shopping mall was beginning to fade. Big-box stores were on the rise, and it seemed that St. Albert Cinemas was the only reason to visit Village Tree Mall. When North Edmonton Cinemas opened in 2003, Village Tree simply couldn’t compete, and shut its doors shortly after. The shopping complex known as Village Landing now sits in its place.

In 2007, a company called Amacom purchased Grandin Mall with the intention of redeveloping the site and making room for new businesses. But due to the poor economy at the time, these plans were put on hold.

In 2014, Grandin Theatres closed, signalling the beginning of a new era. The remaining businesses moved on, and the redevelopment plan moved into full swing.

St. Albert Centre has fared much better than its counterparts. Despite losing department stores like Zellers and, more recently, Target, the mall has managed to adapt and renovate—and has even attracted a number of new stores and businesses. t8n

The world’s first modern shopping mall was designed by architect Victor Gruen in 1956. Gruen had lofty goals, and imagined his mall growing to include apartment buildings, schools, medical facilities, and even parks.

St. Albert Centre almost never came to be. The developer went out of business halfway through construction, and for a while it seemed like the project would simply fail. But the Hudson’s Bay Company, not wanting to lose their investment, worked with the city to complete the project.