Canada’s House of Commons has 338 members, elected officials from across the country who make up our Federal Government. One of these Members of Parliament, or MPs, is elected by the people of St. Albert, to represent their wishes in Ottawa. But St. Albert hasn’t always had their own MP. In fact, St. Albert has been part of seven different voting districts over the years. But each change has brought St. Albert a little more power by allowing us more control over who we elect as our Member of Parliament.

Canada’s electoral districts are defined by a system known as Representation by Population. The idea is that each member of Canadian Parliament should represent roughly the same number of voters. When residents of the Prairies were first allowed to vote in 1887, the voting population of the district of Alberta (not yet a province) was only large enough to warrant a single seat in the House of Commons. Of course, back in 1887, the “voting population” consisted exclusively of white male property owners over the age of 21. Because of this small population, Donald Watson Davis, St. Albert’s first MP, was also the MP for all of Alberta. Davis was succeeded by Frank Oliver, founder of the Edmonton Journal, in 1896.

When Alberta officially became a province in 1905, the electoral districts shrunk, though Oliver still represented St. Albert, as it was part of the new “Edmonton” district, which covered all of Northern Alberta. Oliver was appointed Minister of the Interior in 1905, and was responsible for revoking countless Indigenous land claims, and penned many of Canada’s more heinous immigration policies. 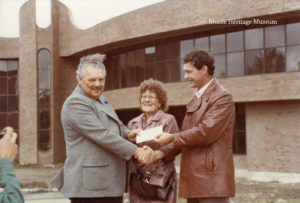 When the boundaries shrunk again in 1914, St. Albert became part of the “Edmonton-West” district, and was represented by William Antrobus Griesbach (1717–1921) and Donald MacBeth Kennedy (1921–1925). Griesbach was a famous general of the Canadian Army and former mayor of Edmonton. Kennedy came from humble origins—he was a long-time farmer and a staunch advocate of socialism.

While all of St. Albert’s representatives up to this point had been from a wide range of political parties, representing a huge array of values, the election of Bigg marked a turning point. Since 1958, St. Albert’s elected MPs have been affiliated with the mainstream conservative party of the day.

In 1968, the electoral borders were re-drawn again, placing St. Albert in the “Pembina” district, alongside most towns west of Edmonton. Perhaps fitting of a heavily rural riding, Pembina MPs Daniel Hollands (1972–1974), Peter Elzinga (1974–1986) and Walter Van de Walle (1986–1993) were all farmers who entered into politics. Elzinga left federal politics after his term to serve on the provincial level, becoming Alberta’s Minister of Agriculture.

By 1987, St. Albert’s population had finally increased enough to warrant its very own district, including the city as well as the surrounding rural area. Van de Walle continued to represent the riding until 1993, when John G. Williams won his seat. Williams was elected as a member of the Reform party, but due to the instability in conservative politics at the time, transferred to the Canadian Alliance party in 2000, and finally to the modern day Conservative Party in 2003. 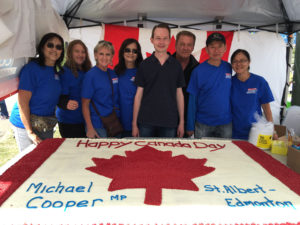 In 2003, St. Albert lost its district status, and merged with north-west Edmonton to form “St. Albert-Edmonton.” Williams continued to serve until his retirement in 2008. The seat went to Brent Rathgeber in the 2008 election, a former member of Alberta’s Legislative Assembly. While elected as a member of the Conservative Party, Rathgeber resigned from the party in 2013, believing that he could better represent the interests of his constituents as an independent MP, marking the only time in St. Albert’s history that the city has been represented by an independent. Rathgeber was defeated in 2015 by Conservative Michael Cooper who serves as St. Albert’s federal representative today. t8n

According to the Canadian Constitution, the federal electoral districts must be reviewed every 10 years with up-to-date census information. If the population of the district has significantly changed, the borders are redrawn.

Equal voting rights were a long time coming. Originally, only those who were eligible to vote provincially were allowed to vote federally, and this policy was used to exclude many minority groups over the years. It wasn’t until 1982 that voting became a constitutional right for all Canadians over the age of 18.