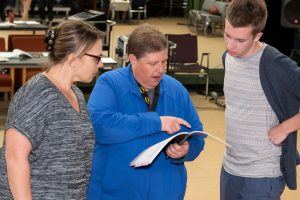 The numbers since 1981: SACT has done over 75 productions, and more than 4,000 children have participated.

How can you tell if a young adult has gone through the St. Albert Children’s Theatre? When they talk to you, they look you in the eyes. More than likely, this confidence came about under the inspirational tutelage of both Artistic Director Janice Flower and Choreographer Jackie Pooke. You may think this program is about a group of kids all learning how to sing and dance as one unit, but it’s also about everyone coming away with something more: lifelong friendships and that all-important knowledge of how to take life head-on.

The St. Albert Children’s Theatre (SACT) puts on two shows per year. There’s a winter show that’s like a Broadway musical (without the neon lights) featuring productions such as A Christmas Story and Big. It has a short rehearsal time of only nine weeks, which breaks down to about twenty hours of rehearsals per week. As Artistic Director, Janice Flower explains, “They know the commitment they’re making, and it’s awesome. We get kids who are totally invested in this program.” Then there’s a spring show that runs at the International Children’s Festival. Its rehearsal time runs about four months. The commitment is still there, but the amount of time spent each week on rehearsals is less intense. Younger kids are encouraged to try the spring production first to see how they like performing and all that goes with it.

But it’s not just the age of the kids on stage that differs with each production—the age of the audience members makes this program unique, too. New York songwriters Benj Pasek and Justin Paul (who wrote the songs for A Christmas Story for SACT’s winter production two years ago) remarked that it was strange to see an audience of mainly adults watching 40 kids in a production—they were used to kids watching kids perform.

As weeks of rehearsals go by in either production season, all involved in the program learn to trust one another and to learn the value of being trusted. That one cohesive unit that sings and dances before you on opening night has become one part of a growing family, and it shows. If someone doesn’t deliver a line on cue, it affects everyone else. “Being responsible, showing up, having to learn their lines and knowing they have other people depending on them to learn their lines—it’s stuff that you really can’t teach at school,” says Jackie. And it’s the mentoring among the kids themselves that gives Janice and Jackie one of the -greatest rewards, production after -production, year after year. The kids help each other with anything to do with the show, as well as any school homework that someone is having trouble with.

Janice has seen growth and development in all the participants. Some kids come in as the shyest introverts and graduate high school with self-assurance and head-held-high confidence. She would rather hear statements like the one a SACT alumnus told her when he said that he had just delivered his project to his entire university class and was one of the few who had the courage to do so. As Janice reminded, “We’re not in the business of training actors. This program is about developing skills, and these skills they’re building are the ones they’re going to take with them no matter what they end up doing. That’s the most important thing of all.”  t8n

SACT has 10 shows for this year’s International Children’s Festival: seven are already sold out, and the three public shows may still have tickets available.

This winter’s production is a -double-feature: A Seussified Christmas Carol and The Nutcracker Sings. Get into the Christmas season early and audition on June 22th and 26th.