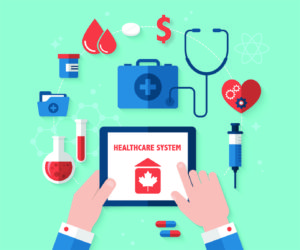 Canadians have long been proud of their universal healthcare system—and—fast to compare it to the state of healthcare in the United States. But when Canada’s healthcare system is measured against those of other industrialized nations, the World Health Organization doesn’t rank us anywhere near the top of the list. It places us 30th out of the 193 member states of the United Nations (UN)—only 7 positions higher than our American neighbours. In fact, according to Canadian Doctors for Medicare, our country is one of the only modernized nations in the world to offer universal healthcare to its citizens without also offering universal pharmacare. This means that while our hospital visits are free, many Canadians still lack access to affordable prescription drugs. When left to finance prescriptions on their own, many Canadians can find themselves at the mercy of drug company prices.

With all of the legal distinctions between things like medicare and pharmacare, or federal and provincial health policies, the healthcare conversation can be difficult to navigate. But with a little bit of background knowledge, you can start to make informed decisions about your prescriptions that will benefit both your health and your bank account.

The Story So Far

Definitions of universal healthcare differ by country, but in essence, it is the idea that all citizens of a nation, regardless of personal wealth, should be able to access the same basic medical resources free of charge. This is why you don’t have to pay your emergency-room doctor for mending a broken bone. However, Canada’s definition of universal healthcare does not include access to prescription drugs. This means that after you leave the doctor’s office with your prescription in hand, you are responsible for covering the cost of your own medication, either through an up-front payment or a pre-arranged insurance plan.

It is difficult to compare healthcare systems around the world because each system arose independently, according to the needs of each individual nation. Canada’s healthcare plan has its origins in Saskatchewan in 1947, when the provincial government implemented an experiment to “unionize” the hospitals in the province. Alberta followed suit in 1950 under the leadership of the Social Credit Party, and by 1961, the rest of the provinces had gotten on-board, too. It wasn’t until 1984 that the federal government, under the leadership of Pierre Trudeau, implemented a nation-wide healthcare proclamation: The Canada Healthcare Act.

Politicians, medical professionals and citizens alike have been lobbying to get universal coverage for prescription drugs (pharmacare) since 1968, well before healthcare was considered a national issue. But despite numerous attempts to pass pharmacare legislation on both provincial and federal levels throughout the decades, this contested policy has yet to get off the ground.

Compared to the price of operating a hospital or paying doctor’s fees, the price for prescription drugs might seem small. But that doesn’t necessarily mean it’s affordable. On average, Canadians spend $500 on prescription drugs per year, and Statistics Canada estimates that 10 percent of Canadians simply can’t afford their doctor-prescribed medication. As a result, many are forced to leave their prescriptions unfilled.

There is relief for certain groups, however. In Alberta, our healthcare system guarantees seniors and people with severe disabilities access to premium-free prescription drugs. What those patients do pay for, however, is the cost of having the prescription filled, which amounts to 30 percent of the cost of the prescription to a maximum of $25. Apart from being affordable, this policy is in part designed to protect vulnerable citizens from over-paying for brand-name drugs. But this system comes with restrictions. To keep these specialized pharmacare programs sustainable, Alberta Health asks doctors to prescribe from an approved list of “lowest-cost alternative” drugs (LCAs), which are generic forms of brand-name drugs. However, if a doctor believes that a more expensive drug will yield better results, the individual must pay for the cost difference out of pocket.

There are about 4000 of these LCA drugs in Alberta, and together, they make up the Alberta Drug Benefit List. While this list makes it possible for Albertans to be more critical shoppers, it is not without its restrictions. For example, most over-the-counter drugs are not included on the list. Regardless of your financial situation or age group, these off-list drugs will not be covered by Alberta Health Services. 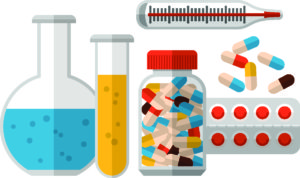 Just as definitions of healthcare differ by country, in Canada, they also differ by province. The universal healthcare system in Canada is nationwide, but each province is responsible for planning and operating its own provincial healthcare system. This is because Section 92(7) of the Canadian Constitution dictates that healthcare is a purely provincial matter. The federal
government’s role is to mandate provincial participation, as well as to provide the legal framework for each province to build upon. But even though the federal policy makes no mention of prescription drugs, Canadians are not without representation when it comes to dealing with pharmaceutical companies. Our biggest advocate at the federal level is the Ministry of Health.

Part of the duties of the Ministry of Health is the evaluation of all new drugs that pharmaceutical companies wish to sell in Canada. The Ministry researches and evaluates each drug and attempts to set reasonable limits on the amount of money that drug companies can charge for them. After this first step, federal involvement ceases. From this moment on, it’s up to the provinces to strike their own deals with pharmaceutical company representatives to decide which drugs they want to include in their various coverage plans and how much further they will negotiate the price from the federally imposed maximum.

Drug companies do have production costs and can be expected to make a reasonable profit from their work, but the job of balancing these corporate needs with the financial realities facing Canadians falls to multiple levels of government. It’s a difficult thing to balance, and as a result, some high prices can be expected. But while other industrialized nations like the United Kingdom and New Zealand negotiate for LCA drug prices by leveraging the competing companies against each other, Canada’s strategy has been to simply pay an agreed-upon percentage of the cost of the equivalent brand-name drug. In extreme cases, this can cause LCA drugs in Canada to cost up to 36 times the amount that they would overseas.

The fee negotiation doesn’t end with the drug company though. Next come the pharmacy markup and dispensary fees. The pharmacy markup is intended to cover the business expenses of running a pharmacy, while dispensary fees are the charges associated with the professional service of filling your prescription. While neither charge is covered by Alberta Health, the provincial government has negotiated limits to the extent that pharmacies are allowed to increase the price of their prescription drugs.

There is, of course, a counter-argument to this cost-effectiveness stance. Doctor’s associations all over the country are quick to point out that when hospital visits are free but medication is not, low-income individuals are, in some ways, incentivized to ignore their prescriptions. Even if someone can’t afford their prescription, they can always count on another free hospital visit when their condition inevitably worsens. Millions of Canadians are currently forced to manage their health in this way, whether intentionally or not. By providing access to universal pharmacare, however, these individuals who move in and out of hospitals as a matter of necessity might be able to better manage their health conditions on their own and wouldn’t place as much of a burden on hospital resources. By comparing our healthcare model with those in countries like Germany and the United Kingdom, studies done by the Canadian Federation of Nurses Unions suggest that a pharmacare program could save taxpayers as much as $11 billion each year. In addition to cutting costs for taxpayers and hospitals, pharmacare would have the added advantage of removing the need for businesses to provide health plans for their employees, which would free up finances to be invested elsewhere in the economy.

The largest objectors to a universal pharmacare system are the pharmaceutical companies themselves. It is easy to imagine these companies as greedy corporations trying to profit from the misfortunes of Canadians, but their argument is a valid one: by providing free access to prescription drugs, the Canadian government would be crippling pharmaceutical industry profits by eliminating demand for all drugs except for those on government-approved lists. Since their interests are largely opposed to those of the average Canadian, drug companies don’t receive a lot of sympathy. But to some, the consequence of upsetting the livelihood of so many people is something to stop and think about.

One of the most striking differences between Canadian and American television channels is the advertising. While American advertising is full of different ads for medications that promise various miracle cures, such practices are prohibited in Canada. But while drug companies are not allowed to advertise to the public here, there are no restrictions to them advertising directly to medical professionals. A common fear is that drug companies could pay doctors to promote their own products, which in turn could lead doctors to recommend sub-par medication to their patients or medication that is needlessly expensive. It isn’t well documented or known how often this kind of behaviour occurs, but the belief is that a universal pharmacare system would do a lot to alleviate these fears by making the cheapest option the norm.

What You Can Do

While shopping around for prescription drugs, most Canadians are at the mercy of the system. There are no easy solutions that will guarantee cheap and effective coverage, but there are a few steps you can take to gain a bit more decision-making power.

The first and most valuable thing you can do is to find a doctor you trust. Don’t be afraid to ask him or her about what your options are. If you want to balance the effectiveness of the drug with an affordable cost, your doctor is the best authority to walk you through your options.

Make use of Alberta Health’s Alberta Drug Benefit List to shop around and compare prices of other brands in the same group as your prescription. Without medical experience, you likely won’t be able to gain much information besides the price, but take that information to your doctor to see if changing your existing prescription to a cheaper equivalent is a possibility.

Talk to your pharmacists, as well. Ask how their markup prices work, as well as how they compare to the provincially imposed maximum. If the markup and dispensary fees are costing you too much money, try shopping around to find a better price.

Research what kinds of health plans you might qualify for. Here in Alberta, everyone over the age of 65 is entitled to pharmaceutical coverage. Certain specific health conditions qualify for coverage as well. Calling Alberta Health to see what your options are is never a bad idea.

Lastly, if you cannot afford your prescription drugs or you or someone you know is struggling financially because of it, advocate for yourself and others by writing to your elected representative to let him or her know that you do not feel represented and would like the policies to change to reflect your needs. The first step to changing any government policy is making your voice heard.  t8n

The state of pharmacare in Canada is the source of much disparity among the provinces. While 10% of Canadians are unable to afford prescription drugs, in Atlantic Canada and British Columbia, the numbers reach as high as 30%.