Back in 1860, the familiar path we now call St. Albert Trail was part of a main shipping route, footpath and horse trail between Fort Edmonton and Lac Ste. Anne. One hundred years later, in 1960, it became a four-lane highway that linked St. Albert to Edmonton. Many improvements have been made over the years and, today, the history of St. Albert Trail continues to be written. Here are a few of the highlights.

In 1806, James Bird of the Hudson Bay Company wrote of the abundance of fish at “God’s Lake” (Lac Ste. Anne). The supply of fish was important to the early settlers. These early shipments of fish by horse cart influenced where the St. Albert Trail would eventually be located.

In the winter of 1858, the explorer John Palliser wrote in his journal that Lac St. Anne was a source of whitefish “which are delicious eating, are of an average size of four pounds.”

Two years later, Hudson Bay Company journal entries from the winter of 1860/61 indicate that some 30,000 to 40,000 whitefish were shipped to Fort Edmonton annually to supplement the dwindling supply of buffalo meat. The regular shipments by horse-drawn cart came on that same trail.

In 1889, the first representative of St. Albert on the North-West Commission opened the initial road from St. Albert to Edmonton. St. Albert Trail was officially established.

In 1902, by decree of the Northwest Territories, our town got its official start when St. Albert was incorporated.

In 1909, Raymond Brutinel led a group of investors and businessmen to develop a proposal for the Interurban Railway to operate between St. Albert and Edmonton along St. Albert Trail. Despite a rather convoluted process of stops and starts, the railway began operating on December 22, 1913. Service abruptly ended on April 1, 1914 with a tremendous fire that consumed the car, barn and contents. It never operated again.

In 1940, Provincial Highway 2 was constructed through the town of St. Albert bringing with it a new bridge over the Sturgeon River.

In 1960, construction began on a four-lane, graded highway from St. Albert to Edmonton. At that time, St. Albert’s population was 3,190. 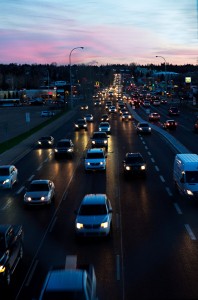 In April 2012, the first meeting of the newly established St. Albert Trail Improvement Plan Committee, a task force of the Mayor, launched with a 15-month mandate to address the following concerns and goals:

Planning is currently underway for a proposed Edmonton to St. Albert LRT extension to run along the eastside of St. Albert Trail. As history may have it, Raymond Brutinel’s 100-year-old vision of an interurban railway may very well form part of our future—again. t8n

St. Albert of Louvain, the namesake of St. Albert Road and, later, St. Albert Trail, was martyred on November 24, 1192—murdered in his own church on emperor’s orders.