There is no truer representation of the people of St. Albert than the St. Albert Community Hall. It was built for the people, by the people, and over the years it has changed and adapted to serve a truly diverse set of community needs. Since its construction, the St. Albert Community Hall has been a library, a movie theatre, a church, a dance hall, a courthouse, a bingo hall and much, much more. And that’s the magic of this dynamic landmark: whatever the community needs, the hall will become. Here’s a glimpse back at its history.

The St. Albert Community Hall began construction in 1940 as the first major project of the newly formed St. Albert Community League. Unfortunately, 1940 was not the best year for local infrastructure projects, as St. Albert, and the rest of the country, found itself occupied with the Second World War. Though construction materials were in short supply, the town banded together and constructed the hall slowly over the next six years, using donated materials and volunteer labour.

Some of the names behind this project are still familiar to us today. The league was led by Richard Poirier, who would later become mayor of St. Albert, and included members like Lorne Akins of Akinsdale fame, and then-mayor Michael Hogan. The league wanted a community space independent of the church, where citizens could gather for whatever purpose suited them. During the six years that the hall was under construction, this exclusively meant community dances.

In the early years, the league struggled to cover the costs of the hall. Maintenance costs were high enough that the league considered abandoning the project and selling the building to the city for the sum of one dollar. But slowly, the residents of St. Albert came around to the idea of using the space. The hall soon became home to bingo nights, weddings, movie screenings, business meetings and more. After a few rough years, it became clear that the hall would be there to stay.

By the 1960s, the St. Albert Community Hall became a cornerstone of the community. Mayor Ray Gibbon even credited the hall with creating a “distinct St. Albert civic identity,” one that would be able to stand up to plans of amalgamation with the rapidly growing Edmonton to the south. According to Gibbon, the hall was the place where people from across St. Albert and Sturgeon County came together to form lasting relationships and community bonds. 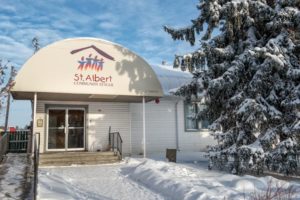 In the 1970s the Community League began sponsoring local sports teams, and the hall became a headquarters for athletes of all kinds. Many of the sports of the time, like hockey and tennis, were represented in the hall, as well as sports that were relative newcomers to St. Albert, such as karate.

There aren’t as many dance nights in the St. Albert Community Hall as there were when it first opened. In fact, over the decades, they have moved from a weekly occurrence to a quarterly event. That, however, is neither a negative reflection on the hall nor the community that uses it. Since it first opened, change has been the hall’s norm. And it will continue to be as the hall plays home to the community’s needs, whatever they happen to be… t8n

Due to donated materials and volunteer labour, the library wing of the Community Hall cost the Community League only $398.80. Estimates for the price of a new library today run as high as $25 million.

In 1940, young people could come to the Community Hall every Friday night to dance. Entry costs were 75 cents per couple. If you wanted anything to drink though, you would have to go across the street to the Bruin Inn, as alcohol was prohibited in the hall.