Would you like a job where you spend your day getting covered in paint and glue? Or creating something that gets featured on a TV show? And, during all of it, getting to have fun, while being paid? Well, you might want to take a page from Odd-Lot Puppetry Co.

“There’s nothing I don’t enjoy doing here,” says Kevin Kuzyk, Odd-Lot Puppetry’s Lead Fabricator. “From the creative aspect to all the problem solving that goes on, we’re always playing in here.” It’s a sentiment that Director and Creative Supervisor Brendan Boyd couldn’t agree with more: “The best part of what we do is when we see the finished puppet and get to see other people playing with it… If you work 80 hours on a puppet, you become a little bit attached to it.” 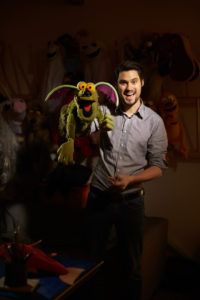 Having spent the day peeking behind the scenes, we’re feeling a little attached, too. Ready to take a spectacular trip into the world of puppeteering? Take a look!

Once upon a time, in a city not too far away, Brendan Boyd wondered if he was making the right career choices. “I spent two years in Vancouver working in the television and film industry,” says Boyd, “but I couldn’t decide what department to work in.”

He loved puppetry as a kid and made a discovery in college that helped solidify his direction. “I learned that I was a much better puppeteer than an actor,” he laughs.

After getting together with some friends and doing some puppet shows locally, it wasn’t long before Boyd started getting asked to make puppets and design shows on a variety of themes.

Fast forward eight years to their current digs in downtown Edmonton, and Odd-Lot is designing and fabricating everything from muppets and large parade puppets to giant fibreglass figures for customers all over the world.

“Since opening the company [in 2006], we’ve worked on TV commercials, film and theatre productions,” said Boyd. In November 2016, Odd-Lot appeared on European TV with some puppets they had designed for Talpa, a media production company in Germany. 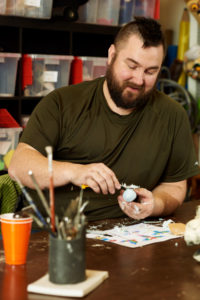 They’ve even done some local work for the Royal Alexandra Hospital Foundation, creating a puppet for one of its recent advertising campaigns.

“It was an incredible experience,” says Boyd, “and we had a great design process […] I’m really proud of the work we did. It’s always great to be part of a project with a good cause behind it.”

When you’re in the business of imagination, everything starts with an idea. From there, it’s all meticulous planning and problem solving. “You need to know things like how it’s going to be stored and where and how they are going to use it,” says Boyd. 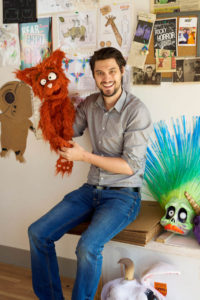 From there, a formal drawing of the character is made before creating a prototype. Throughout this process, the physical look for the puppet is designed, which involves choosing the colours, shapes and lines that look best.

Next comes a road test. “We take what we have and get people’s reactions to see if they find it funny, weird or whatever.” From there, final modifications are made.

Think you might have the right skills and interests to make a good puppeteer? Boyd says, “some of the best people here come from other backgrounds like cosplay.” Discovering those creative threads are important to Boyd since one of his goals is to create a community for puppeteering in Edmonton. “We’re doing a lot of outreach to find other puppeteers,” he says.

Having spent a little time in that world, we’re hoping that writing and photography are transferable skill sets. t8n

By late summer 2017, Odd-Lot will have Halloween merchandise like costumes and masks for sale.