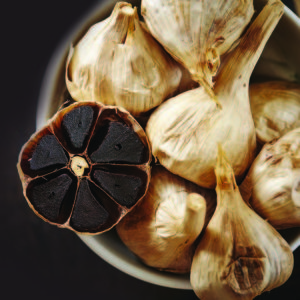 Black garlic, prized for its superfood health benefits and intriguing colour, is actually just regular garlic (Allium sativum) that’s undergone an utterly thorough caramelizing process under high heat and humidity (about 6 week’s worth). As a consequence, sweet, caramelized flavours meet savoury garlic undertones in a texture that’s soft and smooth. Black garlic’s characteristics also include a diminished garlic flavour, hints of aged balsamic vinegar, tamarind and licorice. And although black garlic has only recently made its way into western cuisine and trendy restaurants over the past decade, it’s been used as a culinary ingredient for centuries in Asian countries such as Korea, Japan and Thailand. And did we mention it’s super? Here’s why.

Regular, white garlic—even without the aging process—has been known to provide some health benefits thanks to its anti-oxidant, anti-inflammatory, anti-carcinogenic and anti-bacterial properties. Once aged, however, black garlic has even stronger antioxidant abilities than regular garlic, with increased levels of S-allylcysteine (SAC), polyphenols and other antioxidant compounds. Scientific research indicates that antioxidants may play a role in protecting against inflammatory diseases by neutralizing free radicals or reactive oxygen species (ROS). However, the connection between dietary intake of antioxidants and disease prevention may not have a strong correlation in some cases. That said, there is clinical research that suggests that black garlic consumption may be effective in reducing atherosclerosis progression, lowering the risk of developing colorectal cancer and slightly reducing hypertension. Although some studies indicate that black garlic may also be able to reduce the risk of developing prostate cancer, contribute anti-obesity properties, lower bad (LDL) cholesterol levels and protect against coronary heart disease, more research is needed.

Black garlic complements a wide range of culinary dishes, but it’s commonly used in vinaigrettes, sauces, aioli and dips. It can also be blended with oil into a purée or used as seasoning in its powdered form to instantly add a sweet garlic flavour. Caramelized onions, mushrooms and fennel are commonly paired with black garlic, and as a purée it can be rubbed onto meats, such as steak, chicken and fish before grilling. It also goes well in cuisine that’s lacking a strong umami flavour, which is a savoury flavour classified as one of the five established basic tastes, along with sweet, sour, bitter and salty. Not only is black garlic naturally high in umami, it also has a tinge of sweetness that lends itself to desserts such as black garlic ice cream and a fennel-and-black-garlic gelato.  t8n

Although black garlic can be purchased, it can also be made at home in a rice cooker or slow cooker. You can find recipes online, but most reviews note that black garlic made this way may not be as good as the store-bought variety.

The term black garlic is also the name of a rare, six-clove garlic grown in the mountains of South Korea, that was
rumoured to grant immortality in Taoist mythology.