In terms of the history of waste management, recycling is a fairly new concept. Today St. Albert has a progressive three-tier waste-removal system, environmental mandates and an ecologically conscious population, but as recently as 50 years ago, it was commonplace for citizens to dump their trash straight into the river. The progress we’ve made since then didn’t occur on its own. It came as a result of the hard work of our politicians, business leaders and citizens. Here’s a glimpse at how we got here.

Recycling, as we know it today, didn’t exist in St. Albert back in the 1970s. All waste, regardless of type, was taken to the town garbage dump along the banks of the Sturgeon River, where Riel Park sits today. It was dirty, it was smelly and as you might expect, it leaked into the river. But this wasn’t a huge cause for concern, as the river itself was already an informal dumping ground for those who lived nearby. For those who lived a little farther away, “burn barrels” were a preferred and accepted method of trash disposal. Residents would load up empty oil drums with their flammable waste and set it ablaze. This was just how waste disposal had always been done.

In 1984, the dumping grounds along the river reached their capacity and had to be shut down. Town council began shopping around for a new landfill site but were met with resistance everywhere they went. Understandably, Sturgeon County’s farmers didn’t want a garbage dump near their land, but the newly built Roseridge Landfill in Morinville refused as well, saying that if they started accepting St. Albert’s waste, the lifespan of the landfill would be severely shortened. With nowhere else to turn, St. Albert started sending their still-unsorted trash into Edmonton for disposal.

By the 1990s, attitudes towards waste disposal were shifting faster than ever before. Residents wanted to recycle, but many were tired of having to drive into Edmonton to do so. The Campbell Park Recycling Depot (today known as the Mike Mitchell Recycling Depot) was soon built to address the increasing demand.

Community-driven recycling projects began to spring up, too. In 1993, the very first “Take It or Leave It” event occurred, which offered residents a chance to come together to trade treasures with their neighbours, finding new homes for items that would have otherwise been thrown out.

This event and others like it have helped make recycling a “want-to” in St. Albert rather than just a “have-to.” 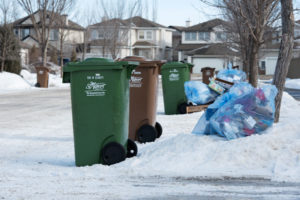 In 2005, the old town dump became a problem again. Over 20 years after its closure, ecologists discovered ground leakage that was draining straight into the Sturgeon River. The City began a 10-year-long remediation process so that the old dumping grounds could truly be put to rest.

In 2009, after decades of demand from environmentally minded citizens, St. Albert started its own curbside recycling program. Residents who once had to drive into Edmonton to recycle could now do it right from their own driveways.

2011 was a big year for St. Albert’s waste management system. A sizable expansion to the Mike Mitchell Recycling Depot allowed the safe disposal of hazardous waste, and in June of that year, the organics composting program began. Organics composting, along with recycling and traditional waste removal, completed the three-tier waste management system that we use today.

Over the last 50 years, St. Albert’s recycling program has grown from nothing at all into one of the biggest success stories in the province. The journey isn’t quite over yet, but with these programs in place, our city’s waste production is expected to drop by as much as 75% by the year 2020.  t8n

Though Roseridge Landfill wouldn’t accept St. Albert’s waste in the 1980s for fear of being overburdened, today it handles the waste for all of

Sturgeon County—a reality that is only possible thanks to the success of St. Albert’s waste reduction programs.

Part of City Council’s environmental plan for St. Albert was to reduce the city’s waste by 65% by the year 2020. Residents were so eager to do their part that this goal was met by early 2012, causing councillors to set even more challenging mandates in the future.