At the turn of the century, St. Albert’s main street burst forth with hotels, general stores, a post office, a bank and a butcher shop. Piron Street, as it was known then, was named after René Alexandre Piron, a canon in France, who donated a large bell to the Mission in 1874. The street’s namesake, however, soon met competition when Fleuri Perron moved from Montreal and opened a brickyard just east of St. Albert in the early 1900s. Perron became a successful businessman, served on the first town council and became the second Mayor of St. Albert in 1908. You can probably guess the rest. Here’s a look at the evolution of Perron Street.

In 1862, Father Lacombe arranged for a wooden bridge to be built over the Sturgeon River. This was the first permanent bridge west of the Great Lakes.

In 1885, the St. Albert Hotel opened on the south side of the river. It burned down in 1899 but was rebuilt with a larger footprint.

The Windsor Hotel, followed by the Astoria, stood across the corner in the 1890s.

A general store was opened on the north side of the river in 1892. Built by Edmond Brosseau, it was later bought by Fleuri Perron.

In 1906, the Dawson Block was constructed across from the St. Albert Hotel. It was a substantial two-story commercial building that housed a bakery, bank, post office, millinery shop and drugstore on the ground level and a dance hall upstairs.

After the Astoria burned down, Fleuri Perron opened the majestic Royal Hotel, which he built with bricks from his own brickyard. Despite its integrity, it met an early demise thanks to prohibition (and demolition).

In 1912, a branch of the Banque d’Hochelaga opened on the west side of the street.

In 1913, the wooden bridge across the Sturgeon was replaced with a steel one.

Fleuri Perron’s general store was destroyed by fire about this time but was rebuilt and lasted into the 1960s.

In 1920, the Banque d’Hochelaga relocated across the street to a new building built with bricks from the Royal Hotel. Still standing at 19 Perron Street, it was refashioned as the Rainbow Cafe in the 1940s. The building returned to its financial roots in 1956 when the Bank of Montreal moved in. The Art Gallery of St. Albert now occupies the site.

In 1927, the St. Albert Garage was built on land south of the bank building. It was run by the Gaulin family until 1971.

In 1928, The Dawson Block burned down. A smaller corner store was erected, and Hec’s Confectionery operated there for many years. It was later home to the St. Albert Pharmacy. Today the Perron Block stands in its place.

In 1928, the second St. Albert Hotel—you guessed it—burned down. The infamous Bruin Inn was constructed on the same site the next year.

Although Fleuri Perron left St. Albert for a time in the 1920s, he returned for his final years and passed away here in August of 1931.

In 1939, the land next to the bank was cleared by horses for the Community Hall. Built largely by volunteers, it was to be the largest dance hall west of Winnipeg. It is still in use today.

In 1944, the Chapel at the end of Main Street was built by Father Bideault, O.M.I.

1954 brought what is sometimes referred to as the “Sewer Parade” down Piron Street, a celebration of the new water and sewer system and St. Albert’s Golden Jubilee.

After being housed in many different locations, the post office moves into its new digs at 13 Piron. The opening in 1962 was attended by local dignitaries.

In 1967, history was rewritten by Town Council when it decided the street name was originally misspelled. They claimed it was always meant to be named after Fleuri Perron, disregarding the fact that at the time of the original survey in 1885, he had not even arrived in St. Albert and had yet to make his mark.

The St. Albert Arena, once home to St. Albert Saint Mark Messier, opened in 1971 at the south end of Perron Street.

In 1984, a duck mural designed by artist Grant Leier was painted on the arena and henceforth became known as the Ducky Dome.

That same year, the 1913 steel bridge was replaced with the current bridge.

When the St. Albert Arena was demolished in 1992, the usable materials were donated to Habitat for Humanity to build 35 low-cost houses in Mexico.

The Perron Street Clock Tower was erected in 1995 and used as a research tool to measure variables in masonry. Some of the bricks are from Perron’s brickyard. The garden at the base of the tower was officially named Victor Post Park, after the accomplished local photographer.

In 1996, a bronze bench sculpture by artist Gary Jones was installed in the courtyard at 15 Perron.

In 1999 a mural, Healthy Communities, by Bella Totino Busby was painted on the upper wall at 10 Perron.

In 2000, the aging Bruin Inn was torn down. The town was divided on whether the historic building should be saved. Vintage St. Albert readers remember the place fondly. Now a look-alike commercial centre stands in its place. 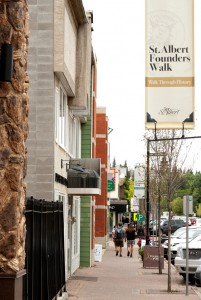 In 2001, a mural titled Lasting Legacy: Tribute to the Sisters of Charity Grey Nuns of St. Albert by Lewis Lavoie was painted on the wall of Drayden Insurance.

In celebration of St. Albert’s 150th anniversary in 2011, Founders’ Walk opened with nine story panels along the street from the Clock Tower to the top of Mission Hill.

In 2011, Time is a River, a stone sculpture by Terry Reynoldson, was installed on the northwest corner of Perron and Sir Winston Churchill Avenue.

Today, a walk down Perron Street brings you back to a simpler time. It is home to many shops and eateries, the Bookstore, the Candy Bouquet and the Art Gallery. The Artwalk is held here as well as the Snowflake Festival, and it is just around the corner from the St. Albert Farmers’ Market—the largest outdoor farmers’ market in western Canada. t8n

Did You Know? The bronze statue that stands in the alleyway by 18 Perron Street is of Saint Albert the Great, patron saint of scientists. He was mistakenly believed to be our namesake at the time the statue was erected in 2001. We were in fact named for Father Lacombe’s patron saint, St. Albert of Louvain.