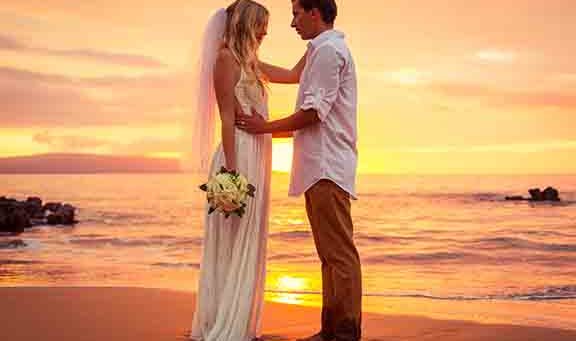 When Mae Anderson decided to get married, she knew she’d get pushback from part of her devoutly Catholic family. She’d already been with her boyfriend for a few years and once the two fell into a bit of money, they put a down payment on a home in St. Albert when she was only 23. With both partners gainfully employed and feeling secure enough to tie the knot, they knew that what they had in mind for a wedding wasn’t exactly going to be enthusiastically received.

“My mother and grandmother expected I’d get married in a church, but we don’t conform to any kind of religious view,” recalled Anderson, a television producer at francophone network Radio-Canada. “We weren’t rebellious enough to not get married at all, yet we wanted to please both sides.”

Not wanting a traditional ceremony, the couple came up with a compromise. Instead of a priest, they enlisted the services of a Justice of the Peace. And rather than host a formal multi-course reception, they made arrangements for a more cocktail-oriented affair with finger food. Once they were married, it was mission accomplished: they managed to ditch the dogma of a religious ritual, yet unite family and loved ones to celebrate the occasion.

“The reason we got married was to enable everybody to get together for the first time in decades,” added Anderson. “We had family come in from everywhere, even from Australia and England.”

No doubt it was a joyous occasion for Anderson, 26, and her new husband. Both are millennials, a skeptical demographic equally praised and criticized for challenging the wisdom of the once-dominant boomer generation. Comprised of people born between 1981 and 1996, it’s an age group with an entirely different set of social values that favour such platitudes as inclusivity over elitism and environmental friendliness over industrial progress.

As for the institution of marriage, it’s not exactly a topic that thrills most Canadian millennials. Recent results from pollsters Angus Reid reveal that roughly one in three young adults have no plans to tie the knot. While Statistics Canada found that roughly 40 percent of young adults were living in common-law relationships, almost twice the number assessed in 1981, few of them expressed a willingness to marry. Whether by choice or by fate, the remaining 60 percent of respondents are still single.

But for the rest of the pack, that’s where the cynicism ends. It turns out millennials who do marry approach that next step in their relationships earnestly, especially if they’ve already been cohabiting for a while, a lifestyle for less than half of young Canadians who plan on getting hitched. While doing it out of love remains high on the checklist, so do other concerns, especially income.

“I find they take the wedding process very seriously for the simple fact that the relationship has built up over time now that they’re living together,” said Nicola Baird-Latham, who, as a stay-at-home employee of a St. Albert-based travel agency, specializes in destination weddings. “They see the benefit of getting married, but they’re now more money-conscious, because they have bills and a mortgage.”

A 2014 study by Hamilton-based think tank Cardis underscored that distinct link between marriage and economic class. Their findings revealed that 86 percent of affluent couples were married, compared to 49 percent in the middle class and 12 percent in the lower class. Interestingly, the research paper discovered that demographics had no influence in the findings. Marriage statistics among well-off millennials and boomers were roughly the same. The results indicated that partners who don’t marry mostly stay together more out of necessity than anything else. On the other hand, married couples enjoy a higher social status, are more successful financially and much happier.

That’s encouraging for matrimony-minded young adults increasingly aware of divorce rates among boomers. While the divorce rates among Canadian millennials are sketchy at best, Statistics Canada discovered that the mean age for splits was 44 for men and 41 for women. A more concise U.S. survey according to Bloomberg assessed the millennial divorce rate was slightly more than 10 percent, with boomer breakups skyrocketing to nearly 30 percent, more than triple the rates recorded in 1980.

Besides cohabiting, marriage-minded millennials tend to wait longer before taking the plunge, usually around the time they hit their 30s. It’s a far cry from 1972 when the average age of Canadian grooms was around 25, with brides being roughly two years younger.

A recent survey from Brigham Young University’s School of Family Life revealed that the vast majority of respondents believed that those who married later signified greater maturity and greater determination to make the relationship work. Other advantages to delaying the nuptials included ensuring personal goals were achieved first, buying more time to secure themselves financially and taking the time to assess the qualities of a potential spouse.

“I think millennials are waiting because women have more choice than ever before,” said psychologist Jennifer B. Rhoads in a study conducted by U.S. relationship researchers The Gottman Institute. “This shift in the view of marriage as now a luxury rather than a necessity has prompted women to be more selective in choosing a partner.”

A millennial’s decision to marry might sound more strategic than romantic, but taking the time to decide on a partner’s marital eligibility once a person’s own goals are solidified seems to be working. That both partners are breadwinners is a bonus, implying true equality. That’s often reflected in millennial weddings these days, with the male partner getting equally involved in the process, which almost used to be the bride-to-be’s exclusive domain. And with millennials being more budget-conscious, $30,000 extravaganzas aren’t as common, with the average gathering more likely to cost less than $10,000.

Then there are the more nuanced stipulations that tend to reinforce the stigma of millennial values. There’s no shortage of anecdotes involving couples insisting that all materials that go into the affair are environmentally friendly. Many opt for gender-neutral references, preferring to be addressed as spouses instead of husband and wife. And others with family and friends from other ethnicities take great pains to ensure that everything to do with the wedding doesn’t offend them on cultural grounds.

Anderson, who had no qualms about having her wedding stay secular, said her motives to head to the altar were both pragmatic and romantic. But before taking that next step, she and her partner made sure all the bases were covered.

“I had been with him for about seven years, and in my mind, I was certain that this was the man with whom I wanted to spend the rest of my life,” she said. “We had both hit a point in our emotional maturity and our careers that we felt we were ready.” t8n

CANADIAN MILLENNIALS AND MARRIAGE BY THE NUMBERS

1.5: number, in millions, of Canadian millennials who are married as of 2018

28: average age of a woman when she marries

31: average age of a man when he marries

37: percentage of millennials who don’t want to get married

47: percentage of millennials who believe marriage is absolutely essential

61: percentage of millennials who would marry if they could afford it

62: percentage of millennials who have never married

85: percentage of millennials who would marry outside their race