Lacombe Park, like many other communities in St. Albert, sprang up rapidly in response to the town’s mid-century population boom. But although its development was quick and meant to fulfill a specific need, the town planners were able to instill a certain beauty to the area that sets Lacombe Park apart. Whether you’re a resident of Lacombe Park yourself or just enjoy walking your dog through the neighbourhood, you’re probably familiar with the tranquility that arises from the gentle slopes and green spaces that dominate the landscape. Let’s take a look back at how it all came to be.

The first rumblings of Lacombe Park began in 1966, at a time when the only thing farther north than Mission Hill was endless acres of farmland. Due to St. Albert’s growing population, town council knew they would need to start building new residential areas, and they believed there was no better location for this development than Father Lacombe’s own backyard. 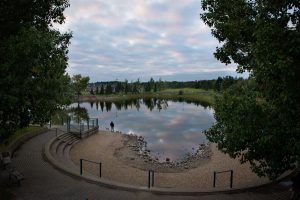 Construction of the first homes began in September of 1970, starting along McKenny Avenue and slowly expanding north. Lacombe Park was planned to be built in several phases, which were to be spread out over the next decade. While the first few phases included only residential neighbourhoods, by the mid 70s, there were enough residents for services to be required.

In 1974, Lacombe Park Plaza was constructed as a home for several local businesses, which meant residents of the community wouldn’t have to travel far for basic amenities. Then, in 1976, after much debate over its architectural design, the Lacombe Clubhouse was built as a joint project between the Kinsmen Club and the St. Albert RCMP. The clubhouse, with its ultra-modern look, would become a community meeting place for the residents of Lacombe Park.

Not long after that, the Separate School Board moved in, constructing Ronald Harvey Elementary in 1976, and W.D. Cuts Junior High in 1978 to accommodate the growing population of children in the area. Both schools were named for founding members of the school board. The Catholic board moved in around the same time, constructing Bertha Kennedy in 1977, an experimental new building model that would be a school and community centre all in one.

Lacombe Park was also planned to incorporate many parks, the biggest of which would contain its very own artificial lake. Lacombe Lake Park, as it is now known, began development in 1975, but its beauty and tranquility would turn into a treasured part of not only the community but also the town as a whole.

With most of the main construction completed by 1979, the 1980s saw Lacombe Park settling into the quiet residential area that it is known as today. But development didn’t cease entirely.

In 1985, after operating out of community centres and gymnasiums for over two decades, St. Matthew’s Anglican Mission built a home for themselves on the edge of Larose Park, becoming the first house of worship in the community.

Commercial development along St. Albert Trail also began booming during this time, as more and more residential development began to push demand farther north to the borders of Lacombe Park.

The 90s and early 2000s saw little in the way of development in Lacombe Park. But today, the community is bustling once again as new construction plans push the boundaries of the community farther to the west. Residents who have been living on the edge of town for the last 40 years are now finding themselves with new neighbours, as areas like Lacombe Estates spring up around them. But complaints have been few, and it seems that St. Albert isn’t opposed to having a little bit more of Lacombe Park. t8n

Lacombe Park wasn’t the only name under consideration. Mayor Ray Gibbon pushed for the names “Highlands Park” and “West Covina Park.” Despite his influence, the rest of town council could not be swayed from the idea of naming the area after St. Albert’s founder.

Lacombe Park was originally planned to house Alberta’s third university, a plan which would have undoubtedly turned St. Albert into a very different kind of city. A last-minute decision by the Government of Alberta moved the university to Athabasca instead.