A lot can change in 70 years—just ask École Father Jan. The K-6 French Immersion school on Mission Avenue has had a front-row seat to St. Albert’s transformation from sleepy riverside community to Alberta’s fifth-largest city. In that time, however, the school has endured a few changes of its own. 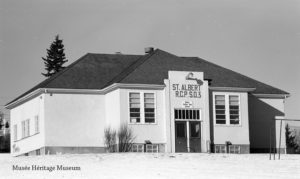 In 1946, the four classrooms of the aging Father Mérer School were bursting at the seams with young pupils. Alberta’s Social Credit government, led by Ernest Manning, decided that a second school was needed. Work soon began on a new two-room, white-stucco schoolhouse on Mission Hill. When it opened in 1948 for grades one and two, the school was named after Father Jan Alphonse, St. Albert’s former parish priest from 1926 to 1930

Now, if this doesn’t sound like the École Father Jan we know today, that’s because it wasn’t. The original Father Jan was actually the Little White School, the first in a series of schools that were built as St. Albert’s post-war population surged in the 1950s. Halfway through the decade, a pond at the bottom of Mission Hill was filled in and work began on another new school. When it opened in 1956, this building—which would eventually become today’s EFJ—was actually St. Albert’s first high school.

The search for space to accommodate a booming student population was a continuous theme for many years. By the mid-60s, St. Albert High was being used to house elementary students from the Mission Park area alongside its secondary grades (9 to 12). Before long, a new high school went up a few blocks away on Malmo Avenue. From 1968, the school on Mission Avenue would be known as Father Jan School.

Besides its population of curious kids, by the end of the 1960s Father Jan was also home to a small menagerie of animals. Students raised more than $15 to buy a squirrel monkey to join the two tanks of fish, two gerbils, and a rabbit already at the school. Every weekend a student was chosen by draw to take the monkey home for a couple of days.

At this point, Father Jan School got into show business for a short time. In the early 1970s, family movies were shown on Saturday afternoons in the gym, and a concession sold Happy Pop and popcorn. The movies were part of an initiative called “Kincinema,” organized by the local Kinsmen along with the library and school board, as St. Albert still lacked a cinema.

Despite these fun times, and even the addition of junior high grades, Father Jan School was eventually faced with a demographic reality. The outward growth of St. Albert meant there were no longer enough young students left near Mission Park to form a school. Fortunately, a French Immersion experiment saved the day. Begun as a kindergarten and grade one program in 1978, the French program gradually expanded, and by 1979 the program had 190 registered students compared with just 69 Anglophone students. That year, the school board announced that the school would go full French Immersion starting in 1980. 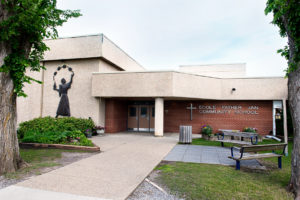 Under Principal Penny Baragar-Brcic, the 2017-18 year kicked off with 316 students enrolled, and the school welcomed 13 new families to its elementary grades. Besides its core French Immersion program, the school offers full- and half-day kindergarten, access to the Greater St. Albert Sports Academy (grades 4 to 6), and retreats for every grade, among other programs. After seven decades and a lot of change, Father Jan is going as strong as ever. t8n

Opening in 1948 for grades one and two, this quaint white two-room school was mainly used for elementary grades and the St. Albert Parish Kindergarten over the next four decades. By 1987, however, it had outlived its usefulness as a school, and in 2009, City Council designated the building a Municipal Historic Resource. A renovation project restored the building and added a new, barrier-free entrance and sidewalk.

The Little White School now serves as a museum depicting what school was like in the province in the late 1940s. According to the Alberta Register of Historic Places, the site is valued for its ties to the Catholic church, its prominent location, and its “simple vernacular architecture.” In fact, of the many two-room rural schoolhouses built by the Alberta government before and after WWII, the Little White School is the only one that survives.