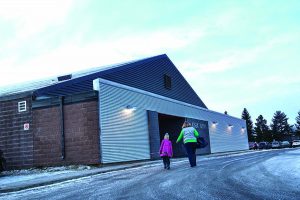 Akinsdale has a peculiar layout when compared to the other neighbourhoods that were constructed alongside it. While most of the communities in St. Albert open up to the rest of the city, or to the country roads that surround them, Akinsdale is closed off along its south-eastern edge. St. Albert may have a strong sense of civic identity today, but back in the 1960s, the threat of the town being annexed into Edmonton was on everyone’s minds. Towns like Beverly and Jasper Place were being absorbed as the Edmonton sprawl grew, and to many at the time, it seemed like St. Albert would be next. Akinsdale is not only a residential area but also an intentional boundary and a statement of independence in response to the growing behemoth to the south.

Like all new developments, Akinsdale started out as a humble proposal on the desk of

St. Albert’s urban planning committee. Back then, it was simply called “Neighborhood 10,” and the development was intended to be the final residential zone on the south end of town. Even 45 years ago, the town’s leaders were concerned that Edmonton and St. Albert were growing a little too close for comfort, and a line would have to be drawn.

Residential construction began in August, 1973 and continued over the next several years. Developers, however, couldn’t build fast enough to keep up with demand, and prospective residents were growing impatient. As a compromise, residents were allowed to move into the neighborhood as each house was completed, rather than having to wait until all the infrastructure could be put in. Those early occupants lacked telephone lines, street lights, sidewalks and paved roads. They would even wake up some mornings to find livestock from nearby farms grazing on their front lawns or skunks and porcupines digging through their gardens. It was the wild frontier of St. Albert.

During the first decade of development,

the children of Akinsdale attended W.D. Cuts School, which was a full six kilometres from their homes. But this changed in 1982, with the opening of Elmer S. Gish, which was built to cater specifically to residents on the southern edge of town.

In 1983, the Akinsdale/Kinex twin arenas were completed, providing the skaters and hockey players of St. Albert with two more sheets of ice during the summer months.

The residential housing construction of the 1970s was only half of the Akinsdale project. The 1980s would see the development of the “Akinsdale South” commercial district, which is now the first sight to greet residents as they come into town northbound on St. Albert Trail. This addition wasn’t without controversy, however, as many residents felt, once again, that the new development would eliminate too much of the desired green belt that separated St. Albert from Edmonton.

After those two decades of initial development, things slowed down in Akinsdale. As promised by those early 1970s urban planners, St. Albert never grew beyond that intentional boundary. Edmonton, however, did not plan any similar growth restrictions on its part, and that green belt never was preserved in the end.

Businesses in the Akinsdale South commercial centre, now known as the Gateway Village Shopping Centre, came and went over the years. As is always the case, some would fall victim to the changing tastes of the public, while other businesses would establish themselves as local favourites. Infill propositions continue to this day, and the residents of Akinsdale continue to protest the loss of their green spaces. Despite the increasingly dense nature of the neighborhood, developers are still finding room to squeeze in housing like the Rosedale senior’s home, allowing more and more people to call Akinsdale home.

Even with the constant expansion of both Edmonton and St. Albert since the 1960s population boom, Akinsdale retains the honour of being the last thing residents see as they leave our city, and the first sight to welcome them home again.  t8n