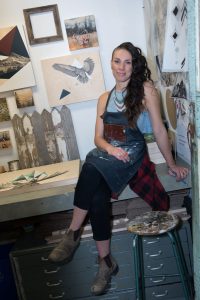 The starving artist is a common stereo-type, but it’s not one that mixed-media printmaker Caitlin Bodewitz wants to romanticize. In fact, Caitlin and her career are perfect reminders that today’s successful artists aren’t only creative people, they’re entrepreneurs. As such, Caitlin emphasizes and strives hard for a balance in all aspects of her career—from her business model, to her visual style, to the very medium of printmaking itself. Creativity is her business, and learning to balance the two has been the key to her success.

For this month’s photo essay, we had the privilege of chatting with Caitlin and discovering a glimpse into the world of an artist entrepreneur. To say that we left inspired is an understatement. Take a look. 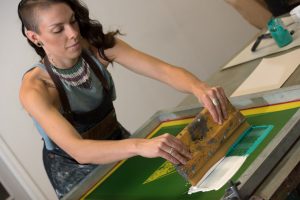 Caitlin’s business model maintains an equili-brium between creativity and professionalism, and this theme of balance surfaces in her work, too. Her style melds the natural and the geometric. “In theory, they’re very different realms,” she explains. “One is soft and organic, while the other uses hard, structured lines. I try to fuse the two aspects in such a way that they enhance one another instead of creating tension. It’s all about balance.”

Printmaking seems complicated when compared to that pencil and paper Caitlin started off with, but she took to the process immediately. She specializes in silkscreening, which is the pressing of ink onto a variety of surfaces. She takes her drawings or photographs and then uses a press to imprint the geometric shapes over top. While most artists use paper for this, lumber is Caitlin’s canvas of choice. “I work mostly with Canadian birch wood rather than paper. The wood grain is hard enough to create a clear image, but soft enough that I’m able to draw or press photos onto it.” 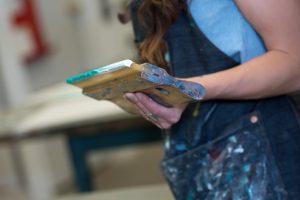 Caitlin fell in love with printmaking early in her education due to its uniformity and diversity. Just one more balancing act that she’s been able to master. “Printmaking allows you to work with all of these diverse styles, whether it’s sketch-like, painterly or anything else. But they all use the same uniform process.” 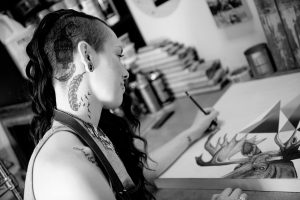 That’s why you won’t find Caitlin hidden away in her studio. A large part of her year is spent travelling around Canada, promoting herself and selling her work.

“My goal is to get my work into the homes of as many -people as possible. That means getting out there and meeting the people who I can share my gift with.”

If you would like to count yourself as one of those people, Caitlin’s next Edmonton appearance will be at Make It! at Northlands Expo Centre from November 24 to 27. In the meantime, you can view more of her work at www.caitlinbodewitz.com, or on Instagram
@cmbprintworks..  t8n

“I think that if you surround yourself with beautiful things, that beauty will transfer into every other aspect of your life.”

“I’ve always been opposed to the idea that artists need to struggle. I don’t think that there is any shame in putting food on the table with things that I create with my own hands.”

“With printmaking you’re able to achieve such a wide variety of styles. It doesn’t feel like you’re stuck in one discipline.”

“I’ve always been opposed to the idea that artists need to struggle. I don’t think that there is any shame in putting food on the table with things that I create with my own hands.”