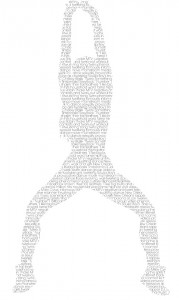 Oxford Dictionaries Online added the definition of twerk in August 2013: To dance to popular music in a sexually provocative manner involving thrusting hip movements and a low squatting stance.

Where did it come from?

Nobody knows exactly who invented twerking, but we do know it came from the New Orleans bounce music scene (a hip-hop subgenre) in the early 1990s. The word itself is a combination of the words twist, twitch, work and jerk.

The first to reference twerking in a song was New Orleans rapper DJ Jubilee in 1993’s “Do the Jubilee All.” MC Cheeky Blakk (also from New Orleans) used the word in a song title for the first time in her 1995 track “Twerk Something.”

Over the next decade-and-a-half, many artists—including the Ying Yang Twins, Bubba Sparxxx, Timbaland and Lil Jon—began referencing twerking in their music. Possibly the most notable mention was in Justin Timberlake’s 2006 hit “SexyBack.” This was the first time a song that mentioned twerking hit Number 1 on Billboard’s The Hot 100 chart.

The year 2009 was big for twerking; the Twerk Team—an Atlanta-based dance group—posted their first video to YouTube that year. The video, which showed the four girls twerking to Soulja Boy’s “She Got a Donk,” got a million hits in the first week. Since then, the Twerk Team’s videos have received tens of millions of views. Some say this is when twerking became a household word.

Twerking’s rise to fame continued through popular hip-hop music and viral videos. In 2013, the provocative dance move gained massive mainstream media coverage after Miley Cyrus’ performance with Robin Thicke at the MTV Video Music Awards. Reactions to the performance were largely negative, but there’s no question Miley put twerking on the map.

Whether we’re pro-twerk or anti-twerk, we’re familiar with twerking. We see it online, on television, on dance floors, even in school hallways. And it’s evolving. There’s wall-twerking, twerking on the floor and twerking while doing the splits. There are twerking tutorials, twerking contests and twerk-out workout classes. Good or bad, this booty-shaking phenomenon has certainly earned its place in pop-culture. t8n

Fun Facts
One hour of high-energy twerking will burn about 500 calories.

Did You Know? “Whistle While You Twurk” by the Ying Yang Twins is widely considered the first true twerk anthem (a song with a heavy beat perfect for twerking).

Weight training, how to

Fabulous items for the Spring 2015