In 1885, the St. Albert Hotel was built on the site where the Bruin Inn would eventually stand.

The hotel was destroyed by fire in February of 1899 but was rebuilt four months later.

St. Albert was becoming a popular place for city dwellers to enjoy recreational activities on Big Lake and the Sturgeon River.

In 1916, prohibition came to Alberta, partly causing the demise of the Royal Hotel, which stood on the opposite corner of the rebuilt St. Albert Hotel.

In 1924, prohibition ends in Alberta, prompting a rush on liquor permits.

The rebuilt St. Albert Hotel was purchased by the Northwest Brewing Company in 1928. Within months, it too was destroyed by fire.

Without hesitation, Peter McKay, a salesman for the Northwest Brewing Company, hired Edmonton architect William G. Blakey to design a new hotel in California Mission style. Local contractor Thomas Ingram was to be the builder.

The company’s distinctive Bruin Beer became the inspiration for the new hotel’s name: the Bruin Inn. Their slogan was “Drink Northwest Beer—it’s a Bear!”

In January 1929, the Edmonton Bulletin described the newly opened lodging as “the last word in comfort and luxury. There is a 24-hour service of electric light […] while hot and cold water is continuously on tap.” (Notwithstanding having to use an outhouse!)

Ice blocks for chilling food and beverages were brought in from the river next door.

The Bruin Inn became the place to share a drink. There were separate entrances for men and women, but they essentially led into the same room.

The building endured additions and renovations, and in 1948, the tavern was expanded to accommodate the 600 people who came through its doors.

The Bruin’s coffee shop was also a gathering place, as much for the homemade food as for the good-natured personnel.

It wasn’t until 1967 that men and women were once again allowed to drink together in bar rooms in the rest of the province.

In 1971, fire caused extensive damage in the Bruin’s upstairs rooms.

During the Oilers’ Stanley Cup reign in the 1980s, former St. Albert Saint Mark Messier would bring the cup to the Bruin Inn to celebrate his roots.

The bar had a Wild West theme in 1993, and a large fibreglass bear was placed on the roof. The bear disappeared in the latter part of the decade but was found by chance in an Edmonton antique store in 2013. It is now proudly in the possession of the Musée Héritage Museum.

The building went through many incarnations in the 80s and 90s: Amnesia’s and Total Recall (nightclubs), Desperado Saloon and in the end was a crumbling, purple version of its former self.

The End of an Era

Despite efforts from the city and a group called Save Our Bruin, the province deemed the iconic structure (all but the façade) unworthy of historical designation. Although part of the façade was removed with the intention of using it on the new building, it is unclear if this actually happened. 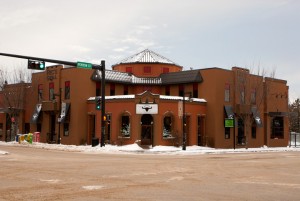 A commercial centre was built on the site in 2001, in the same Mission style honouring the Bruin. Ric’s Grill was the first tenant slated for the new building, and it anchored the corner for over 10 years. Other cafés and shops filled the building, and today it is home to Blue Rare Steak & Bar, Cranky’s Bike Shop and Vinyl Rock Café. t8n